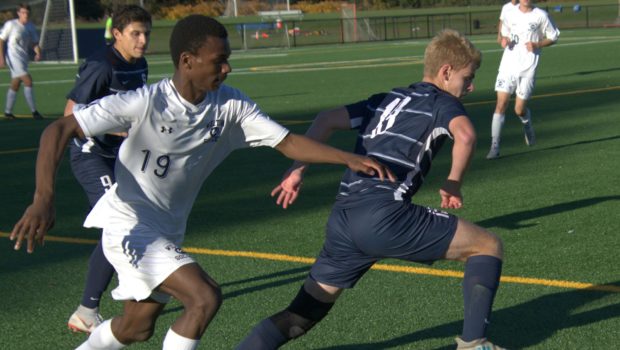 Wilton started the season on fire. The Warriors blazed to an 8-0-5 record, through their first 13 games. They stumbled a bit recently — losing 3-2 to Stamford on Thursday, then 4-2 to Greenwich 24 hours later — but they remain one of the toughest teams in the FCIAC. They play direct; they’re fast, and they’ve got a midfield that is hard to shut down.

Staples has been up and down. After a strong start against the cream of the league, they dropped a couple of games and a tied a couple more against lower-ranked opponents. But there’s plenty of parity in the FCIAC, and they came into today’s match back on track with 3 straight victories (1-0 St. Joseph, 2-0 Westhill, 3-1 New Canaan).

This game — the final one of the regular season — would determine seedings for the league tournament that starts Thursday. Staples already qualified for the 8-team event.

The blue-and-whites thought that today might have been the last one on The Hill. But heavy rains yesterday closed the grass Loeffler Field. It was switched to the new turf at Wakeman.

Knowing the pace would be quick at the start, Staples sat back a bit. But when they started to press, the action sizzled.

Keeper Reed Caney made a big save in the 12th minute — his first of several — but the back 4 of Surya Balaji, Brendan Lynch, Benny Feuer and Ryan Thomas (and then Carter Bassler) kept the visitors largely at bay.

Evan Birns worked the left side well. He sent Perez Elorza in, but the connection just missed.

In the 31st minute, Caney saved a one-time shot off a cross into the box. But Nate Bennett pounced on the rebound, and drew his side level.

Birns’ individual effort 3 minutes later went just wide. That was rare. This was a match in which the Wreckers clicked as a unit. There were combinations all over the field. Emerson Anvari, Haydn Siroka and George Smith worked 1-2s in the box. Murilo Moreno won balls at midfield, laid off quickly and followed up. Sam Liles was all over the field on the right side, tracking back and racing forward, then cutting balls into the box. Alan Fiore used his speed well on the left side.

Caney saved again, 6 minutes after halftime. A few minutes later, Birns ran through, and found Perez Elorza. He cut the ball back to Smith, who was taken down in the box. The penalty kick was saved though, and the 2 sides remained level.

Josh DeDomenico came on to provide spark up top. As the match wore on, the Wreckers grew stronger. The final 20 minutes may have been their best of the season. They pressed forward, looking for the go-ahead goal. Wilton kept them honest, countering quickly when they could. But the tide was running in Staples’ favor.

The clock ran out, after 2 dangerous corner kicks. But the Westporters — who were not happy following ties with Trumbull, Fairfield Ludlowe and Ridgefield — felt better after this draw. They’d taken the game directly to a very strong foe. They played quickly, tightly, and with heart and grit. They played Staples soccer throughout.

And they had a good time.

“This was one of the most fun games I’ve seen in a long time,” said head coach Dan Woog. “It was end-to-end. It was bitterly fought, well-played, hard but clean. Our guys feel good. And they have a ton of momentum going into the post-season.”

Pairings will be announced tomorrow, following tonight’s final games. The quarterfinals will be played at the higher-ranked team’s field, at times to be determined. Carter Bassler had an outstanding game against Wilton. (Photo/Christina Bassler) Josh DeDomenico does whatever he can to get the ball. (Photo/Christina Bassler)