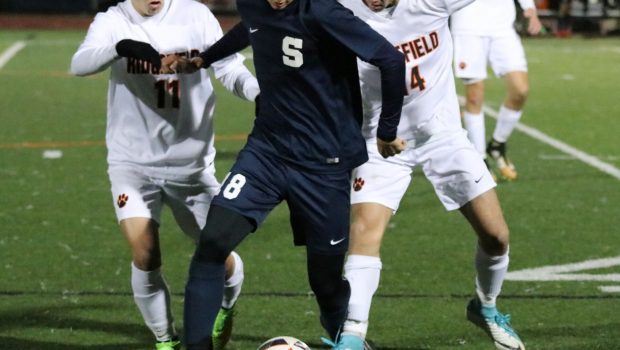 But even before the two FCIAC foes met at Tiger Hollow tonight, everyone knew all bets were off.

The rivals had battled to a 0-0 draw earlier in the season. In that match the Wreckers shut down high scoring forward J.T. Siano, who’d notched 10 goals in the previous 7 matches.

He continued to tear through the league. But Staples was proud of its powerful defense. Chris Martenson, Ryan Fincher, Gabe Baltierra and Nick Ambrose — fronting keeper Ry Cohen — had recorded 10 shutouts in 18 matches — including the previous game, a 1-0 overtime win in the 1st round of the state tournament at Stamford.

In that match Ambrose was moved into center midfield, paired with Matt Engler. Tonight, Ambrose stayed there, with a special added assignment: Deny Siano the ball.

He did his job well. So did his teammates, with Fincher and Engler also making sure the dangerous Tiger stayed far from goal.

The 1st half was played almost entirely between the 2 18-yard lines — in other words, outside the penalty areas. Neither side had a telling shot, until late in the half when Cohen punched a strong shot clear, then followed up with another solid save.

Staples’ game plan was working well. They continued their strong play in the 2nd half. Martenson earned a corner kick; Fincher, up on offense, back-headed it just high.

Excellent ball movement continued — aided, in part, by Ridgefield’s tactic of sitting back, waiting for a counter.

Mahr ran through and crossed well — but no one was there.

The Wrecker defense held stoutly — included on 2 straight corner Tiger corner kicks, with 10 minutes to play. But a 3rd corner almost found net — until Liles cleared it off the line.

With 3:30 to play, and Ridgefield applying their strongest pressure of the day, Cohen made another key stop.

And then — for the 2nd straight match — Staples headed to overtime. Once again, they’d play 2 10-minute periods, to completion.

By this time, the temperature had dropped near freezing. The fans — and players on both benches — were ice cold. But the action on the field was red hot.

Three minutes in, the Tigers rifled a shot off the crossbar.

The action surged from one end to the other — including both penalty areas.

Then, with less than 4 minutes to go in the first OT, a Ridgefield shot caromed off the left post. Scooter Glass was in the right place at the right time to slot it home.

Energized by the sudden strike, the Tigers did not sit back. They wanted another.

But the Wreckers battled even more fiercely. Unwilling to see their season end, they defended with all their might, worked the ball forward with poise, pressed up top, and covered tremendous territory.

It was not enough. Ridgefield protected its lead well, and hung on for the win.

Staples’ season was over, with stunning finality. As happens to every team in a tournament except one, the final game ended in defeat.

Yet head coach Dan Woog did not call it that. “The scoreboard says you lost,” he told his devastated players. “But you were not beaten.”

He told them to hold their heads high. They’d played excellent soccer, and battled right to the end. They had earned, he said, the right to wear the t-shirts that captains Engler and Martenson designed in preseason.

QUICK KICKS:  In 180 minutes of soccer this year, Staples and Ridgefield combined for a grand total of 1 goal…

Midway through the 2nd half, the ball suddenly popped and deflated. A new ball was quickly put into play…. Matt Engler had a great game at midfield against Ridgefield — even when double-teamed. (Photo/Alan Frost)