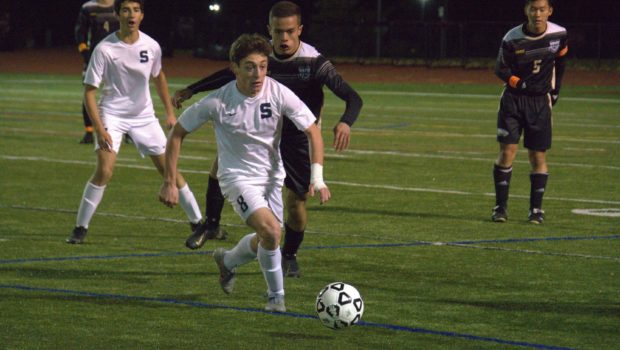 At Sunday’s Staples soccer banquet — after receiving a Block “S,” as the team’s Most Valuable Player — senior Patricio Perez Elorza delivered this speech:

If I were to bring a new friend to Westport and give him a personal tour, the first place I would bring him is Albie Loeffler Field. Here, I would tell him I have enjoyed the beauty of soccer, shared joy with fans after a win, endured some soul-crushing defeats, and represented my school proudly for 3 years.

But I would also tell him that to me, Loeffler Field showcases more than just my experiences. It showcases the numerous unbreakable bonds that were formed by Staples teammates on and off the field. It showcases people’s personal growth through soccer. The resilience, hard work, the hunger Staples soccer players have acquired through competing. It will always remind me of the numerous hours we have spent on the field, working hard to overcome our weaknesses and improve upon our strengths.

I came to Staples as a sophomore, after spending my first year playing for the Development Academy. Soccer season as a freshman passed very quickly. I enjoyed soccer with my academy teammates, but I was feeling a bit disconnected from my high school.

During this time, Chris O’Dell and Tom Henske asked me if I wanted to play for Staples. After a lot of deliberation, I decided to make the switch. I stepped off a known path into something new. But it was definitely a path I would not regret.

But it’s more than memories this Staples soccer gives you. It teaches you lessons. To never underestimate an opponent, to treat others with respect, to learn the rewards of working hard.

It’s also about the friendships. The brotherhoods. The idea that you know you’re fighting for more than just yourself. You’re fighting for your teammates, your school, your town, your coaches and all those who have come before you. This idea brings Westport together. It brings the team together. I have never been so close to a group of people in my life.