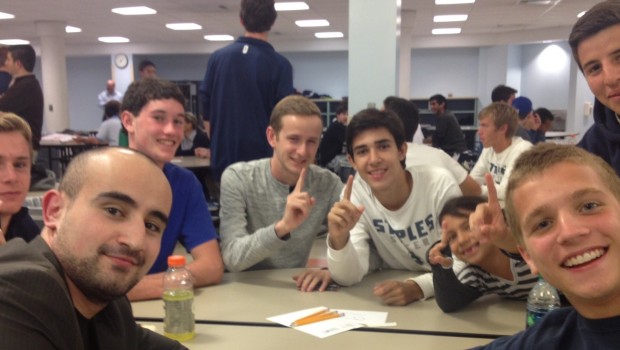 It was a tremendous evening. Questions ranged from the faces on Mt. Rushmore, to the sides of a dodecahedron, to which 2 American coins make up 30 cents if one is not a nickel. (A quarter and a nickel — one is not a nickel, but the other is.)

Raffle prizes included a round of golf with Jack Scott; a $250 shopping spree at Jack Wills; tickets to the New York Knicks and Westport Country Playhouse, and dozens of gift cards, shirts and other items.

The food was fantastic too.

Thanks go to all the parents and players who contributed, led by varsity captains’ parents Patricia Alanis and Karen Scott. Funds raised supplement the soccer program, including — but not limited to — paying down the pledge on the Wakeman B turf field; the end-of-season banquet; scholarships; Loeffler Field and the terrace, and much more. Amy Leonard and Indy Goldberg coordinated the winners’ and raffle prizes — nearly 100 of them.