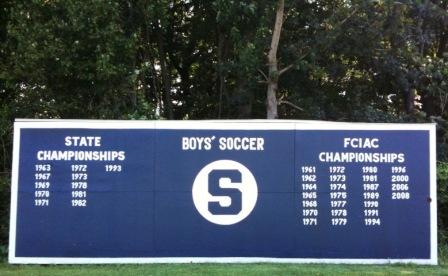 In 1982, Rob Stone ’83 scored one of the most memorable goals in Staples soccer history. The defender’s blast from midfield beat the Ridgefield keeper with 7 minutes remaining in the state championship game, and gave the Wreckers a 1-0 victory. It was their 2nd straight state crown — and the only goal of Rob’s career.

Now Rob’s son Matt is poised to make history of his own. He’s the catcher for the state champion Westport Little League team that plays Vermont for the New England championship tomorrow (Saturday, August 10, 7 p.m.). The winner represents New England at the Little League World Series in Williamsport, Pennsylvania next weekend.

Yesterday, ESPN — whose headquarters is in Bristol, Connecticut, the town where the New England championships are held — showed the top 10 plays of the previous game. Matt Stone was prominently featured.