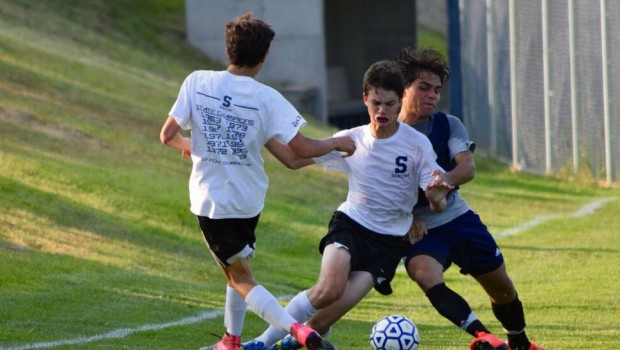 The Choate match has become a highlight of Staples’ pre-season schedule. It’s a great opportunity for the Wreckers to test themselves against a seasoned prep school opponent with a lineup of players from around the globe.

The scoreless deadlock was broken midway through the 2nd half. A play that began with tough defense deep in the Wreckers’ end ended with a fine cross by Andres Marmelo, to an unmarked Timmy Liles. The sophomore calmly finished, low and hard.

Will Birch, Griff O’Neill and Tyler Wright helped spark the 2nd half.

“It was a true team effort,” head coach Dan Woog said. “And of course we also saw plenty of things that need work, and that we will build on.” Chris Martenson makes no mistake about who will win this ball. (Photo/Armelle Daniels)