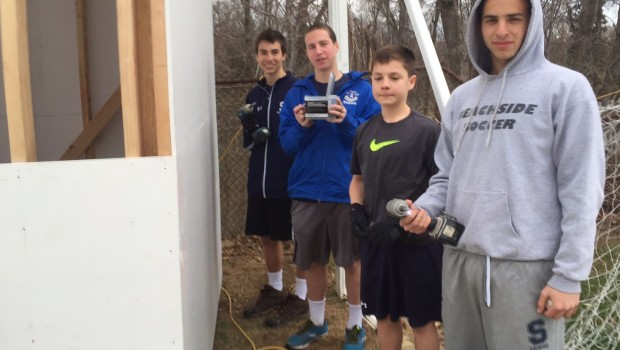 Staples soccer coaches always tell their players: “This is your program.”

Over spring break, more than a dozen Wreckers took things into their own hands. Literally.

For 3 days, freshman coach and renowned builder Chris O’Dell and a crew of his workers showed the Staples players how to build an equipment shed. The new structure — a generous gift from the 2014 team — will replace the old one at the east end of Loeffler Field.

The Wreckers cleaned out the dilapidated shed (removing a dead animal in the process). They helped demolish it. Then they worked to frame and roof it. Still to come: O’Dell is building a handsome block “S” for the front, and painter Bill Evans will add the years of all 12 state championships and 27 FCIAC titles.

This will be at least the 4th structure on Loeffler Field, but the 1st that is only for storage. In the 1960s, ’70s and ’80s, training kickboards sat perpendicular to the far fence (along the south goal line). In the early 2000s O’Dell built another kickboard there, which doubled as storage. When Jinny Parker Field was turfed in 2006, the field hockey field was extended. The kickboard was moved twice — finally placed against the fence — and could no longer be used to practice shooting.

The new structure is a welcome addition to Loeffler Field. Thanks to project leader (and 2015 co-captain) Noah Schwaeber, and all the players who helped: senior Andrew Puchala; juniors Kenji Goto and Jack Zeldes, sophomores Luca Cocito, Ziggy Hallgarten, Sam Kantor, Jerrett Rende and Sebastian Wick; and freshmen Will Birch, Matt Engler, Steven Frost and Ian Weiler. And thanks of course to Chris O’Dell, for his tremendous contributions to this project. Sam Kantor helps put the remains of the kickboard in a dumpster. Chris O’Dell attends to a crisis. Ziggy Hallgarten (center) and Ian Weiler (right) learn how to put a roof on a building.