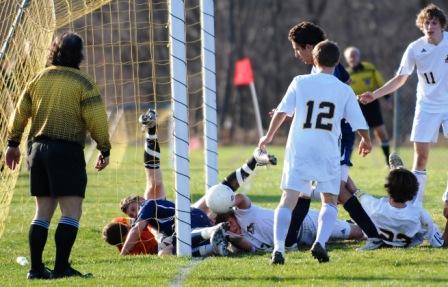 A few times a year, the Staples boys soccer program offers itself up for local charity auctions. A Better Chance of Westport is a favorite cause. Winners generally ask for the Wreckers to appear at a soccer party, or give lessons. The boys throw in an autographed ball, and Staples soccer souvenirs.

This spring, the Staples boys went for several hundred dollars at the King’s Highway and Saugatuck Elementary School auctions. For the past 2 Sunday mornings, players helped out with soccer parties. It’s hard to tell who had more fun: the Wreckers, or the 7-, 8- and 9-year-olds.

Diego Alanis (left) and Jack Scott try to keep up with a pack of Saugatuck Elementary School kids.

Between playing games (and World Cup), eating cake and just hanging out, the Staples boys connected with some of their many fans. And remembered what it was like to be a little kid a few short years ago, dreaming of one day wearing the Staples “S.”

King’s Highway School girls — many of whom play on the Westport Soccer Association U-9 team — celebrate a World Cup goal against Jack Scott.