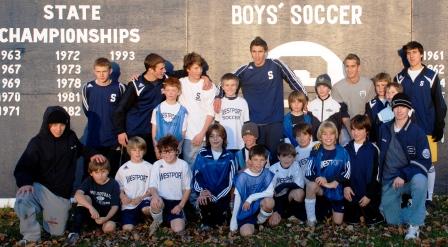 For the 4th year in a row, the Staples soccer team donated an item to the A Better Chance of Westport “Dream Event” auction:  themselves.

Whoever won the team arranges any kind of event — a party, soccer clinic, whatever.  This year the team went for $400 — a record — helped along by a soccer ball signed by the state championship team.

“We are proud to support ABC,” said head coach Dan Woog.  “This is a tremendous program, which helps not only the young men in it, but the entire town.  We look forward to arranging a great event with whoever ‘won’ us.”

(NOTE:  A few auction items remain.  They are available until 11 p.m. on Thursday, April 1.  For ifnormation, click here.)

The 2009 Staples varsity, and WSA U-9 and U-10 players gather together — the happy result of last year's ABC House auction.

Tags: A Better Chance of Westport