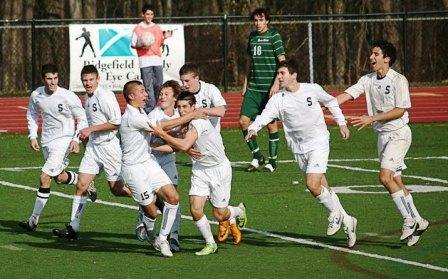 After Saturday’s state championship match, several alumni asked:  Is that the largest margin of victory by any Wrecker squad?

It is.  Not only that, it’s the largest margin of victory in the state tournament’s largest division since the event began 61 years ago, in 1948.

In fact, only twice before in 6 decades has a team in the largest division scored as many as 4 goals in the final.  In 1954 Wethersfield defeated Manchester 4-1, while in 1977 Hartford Public downed Danbury 4-3.

One more for the record books!

One Response to Staples’ Victory Margin Is Largest In Connecticut History*