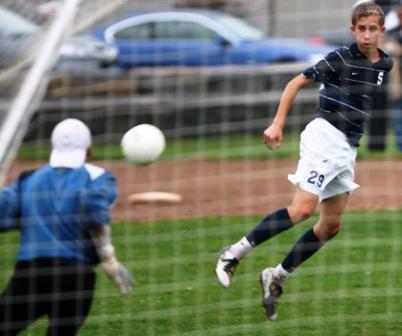 The Wreckers registered another first today:  a match at Went Field.

Bassick’s home field is now a nice park, hard by the railroad tracks and I-95.  It’s small, but the grass was in good shape (despite today’s rain).  And though the Lions were out of contention for an FCIAC playoff berth in this final regular season encounter — and their small numbers have been hit with injuries — they are much improved over Bassick teams of previous years.

Greg Gudis made it 2-0 just 2 minutes into the 2nd half.  He picked up a loose ball near midfield, then fired a cannon shot over the keeper.

The Wreckers rested their starters, in preparation for Friday’s FCIAC quarterfinal match (3 p.m., home, against an opponent still to be determined).  They showed strongly — with keeper Connor Walsh making a superb diving save — and in the final 5 minutes, 3 goals were scored.

Dylan Evans made his 1st appearance of the season, following a knee injury….