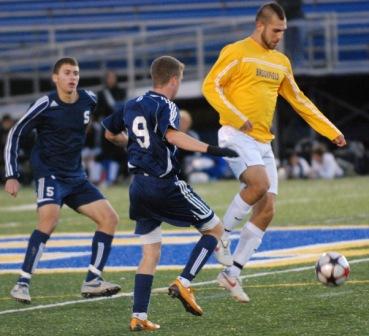 For the 2nd year in a row, Staples scheduled a 16th game — the maximum allowed in the regular season — against SWC powerhouse Brookfield.  Last year the Wreckers rebounded from a 1-0 loss to Norwalk by shutting out the Bobcats 3-0 at Loeffler Field.  This season, following a hard-fought 2-1 victory at Norwalk, they journeyed north for their 1st-ever game on Brookfield’s turf.

The hosts drew a large crowd, and they gave them what they wanted.  Just 2 minutes into the match, defender Mikey Fitzgerald cleared a near-certain goal off the line — but Soly Zarrini knocked in the ensuing corner kick, and suddenly the Wreckers were down.

The Bobcats took the game to the Westporters.  Playing very direct, they put Staples under uncommon pressure.  And with a throw-in to match Mikey  Scott’s, they gave the Wreckers a taste of their own medicine.  The blue-and-whites forced passes, and shot from far further out than usual.

Keeper Michael McCarthy came up big in the 30th minute.  But 4 minutes before halftime Brookfield struck again.  This time Colin Burke knocked in a loose ball, after Staples failed to clear a corner kick.

The Wreckers opened the 2nd half the way they had not played the 1st.  Mike White found Brendan Lesch.  The junior ripped a shot — but keeper Matt Bonn  dove well to his left, and punched the near-certain goal away.

Lesch nearly got 1 a few minutes later.  Staples had several more chances, but in the 60th minute captain AJ Stueck roared forward on a breakaway, and made it 3-0.

Staples refused to fold.  White got his foot on a goalmouth scramble, making it 3-1.  But with 7 minutes remaining it was not enough.  The Bobcats managed the clock well, rewarding their vociferous fans with a huge, and well-deserved, victory.

“Brookfield did to us what we do to a lot of teams,” Wrecker head coach Dan Woog said.  “We’ve got 3 big games this week:  New Canaan, Wilton and Ridgefield.  It will be interesting to see how our guys react.  I’m betting it will be the way the best Staples teams have done.

Alan Reiter and Brendan Lesch are dwarfed by a Brookfield player. (Photo by Lisa Krosse)

7 Responses to Staples vs. Brookfield