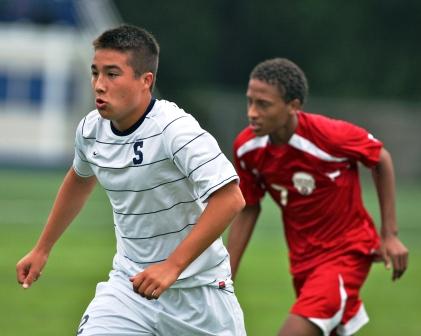 Central High arrived at Loeffler Field this afternoon with a distinction no other FCIAC team could claim:  They’d won their previous 2 matches against Staples.

Both by shutout, no less.

But the Hilltoppers have been hit hard, first by graduation, then by a new Bridgeport eligibility rule involving classroom grades.

It took the Wreckers just 1 minute to get on the board.  Steve Smith fed Max Hoberman, whose long cross was finished with clinical precision by Lorenz Esposito.

In the 16th minute Dylan Evans flicked a great ball to Esposito.  The junior striker hit Smith, who fired a long shot.  It rebounded out — and Esposito was there, for his 2nd straight score.

Ten minutes after that, sophomore Diego Alanis found David Hoffman for a header.

Less than a minute later, Hoffman nailed his 2nd goal.  This one came off an assist from Terence Gibbons.

Just 17 seconds before halftime, Alanis and Phil Foisie got the ball to Gibbons; he fed Smith for a 5-0 lead.

A different 11 took the field for the 2nd half, and continued Staples’ strong possession and passing game.

In the 46th minute Will Meinke’s free kick was headed in by Ethan Bradeen.

“We did exactly what we wanted to, in terms of shape, stepping up and team voice,” said head coach Dan Woog.  “It’s nice to see training translate into matches.” FINAL SCORE:  Staples 7, Central 0.  Season record:  2-0-0.

The freshmen scored 1st in their season opener against Greenwich, but fell 3-1.  Jordan McNair got the goal; he and Ollie Hickson looked strong on defense.