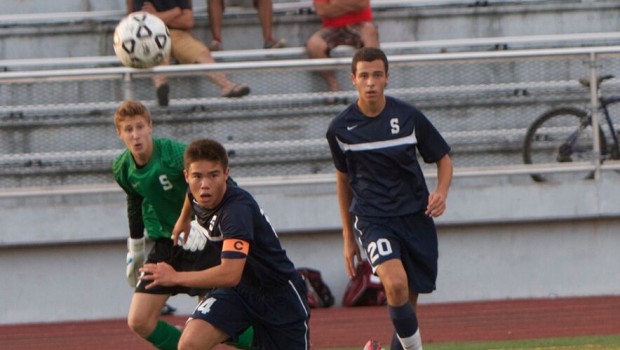 For years, Kennedy Stadium behind Central High School was one of the most difficult places to play soccer. The turf — a 1st-generation field reminiscent of the original Astrodome — had the consistency of a parking lot.

This year, the stadium sports new turf. The difference is striking.

But this Hilltopper team is like some of the Central sides of old. They are fast, skillful, and their spine is strong.

The Wreckers opened the game with a strong wind at their backs. Kenji Goto set the tone with a fierce tackle. Daniel Perez Elorza fired and was saved, but there was no follow-up.

A minute later, Matteo Broccolo cleared a Bridgeport shot off the line.

As the match continued, it took on overtones of Staples’ season opener at Trumbull. In that game the Wreckers failed to keep the ball on the carpet, and were stung.

Gradually, though, they worked the ball on the ground. Daniel Reid, Matt Engler and Graham Gudis were effective in establishing the rhythm the Westporters wanted.

Keeper Ziggy Hallgarten was tested a few times, and kept the scoreline clean. Aidan Wisher was finding space on the right side, and his long throw was working But time was ticking down.

In the 67th minute, Luca Cocito’s shot was knocked away, for a corner kick. Gudis lofted a ball that Josh Berman headed forward. Wisher pounced on it, in mid-scramble, and blasted it with authority into the back of the net.

Central came right back. A couple of animalistic tackles by Goto, coupled with good positioning by Berman, Broccolo and Chris Martenson, kept them at bay. Then, with a minute remaining, Hallgarten punched out a dangerous corner.

“We gutted this one out,” said head coach Dan Woog. “This was a character-builder. It’s 3 points we needed, and 3 points we definitely earned.” FINAL SCORE: Staples 1, Central 0. SEASON RECORD: 2-1-0.

With Kurt Dasbach filling in for Nicky Hoberman, the reserves shut out Central 4-0. Goals came from Stephen Rowland, a header by Jerrett Rende, Shane Dasbach, and a Luka Autard blast. Ry Cohen had a very strong game in goal.