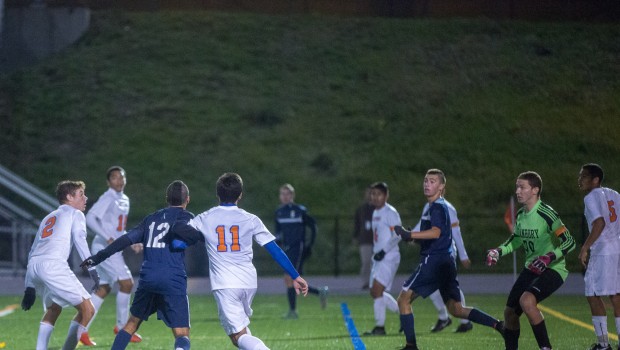 Danbury’s football stadium has been very good to the Staples boys soccer team.

It’s where Greg Gudis and Steve Smith scored fantastic goals. Noah Bender won a match in the final minute. And, earlier this year — in the 3rd game of the season — Josh Berman headed in Daniel Perez Elorza’s corner kick with 5 seconds left in the 1st half, lifting the Wreckers to a 1-1 draw with one of the top teams in the league.

The Hatters went on to an 11-2-3 season, earning the #2 seed in the FCIAC tournament. Staples was up and down, playing well against top teams but stumbling against lesser lights. The Wreckers caught fire at the end of the regular season though, roaring to 5 wins in their final 6 matches, including 3 wins in 3 very exhausting days.

With 2 days rest — almost a vacation — they traveled north as the #7 seed. But they were confident, and that counts for a lot.

The 1st half was a midfield battle. Michael Reid was Staples’ playmaker. Jack Zeldes marked the Hatters dangerous Grimaldo De Sousa. Patrick Beusse roamed far and wide on the right flank, while Denzel Robinson — the fast-improving (and very fast) left-sided midfielder — was both an offensive force and an excellent marker.

Kenji Goto organized the backs. Berman won his share of head balls. Grant Sirlin and Gabe Pensak commandeered the flanks, while behind them keeper Noah Schwaeber scooped up the balls that came through.

The Wreckers kept Danbury at bay for much of the 1st 40 minutes — but the Hatters did the same to Staples. Each team’s few shots came from long range. But the chess-like back-and-forth at midfield was tremendously exciting for soccer fans.

The 2nd half heated up even more. Staples lost both Perez Elorza and Zeldes to injuries (joining captain Andrew Puchala on the sidelines). But the game was opening up. Players on both sides were slipping into the box.

The Wreckers inserted Graham Gudis for his service ability. Almost immediately, the move paid off. The junior took a free kick near the corner kick spot, on the left. Gabe Pensak, on the far side, redirected it across. Nate Argosh pounced, and drove it home. Just 9:36 remained.

Forty-nine seconds later, it was 2-0. Beusse served a long ball to an onrushing Gudis. He collected it calmly, outraced his defender, and finished cleanly.

Staples had just 8:34 left, to protect the lead. But the Hatters are a proud bunch, and they fought right back. They sent everyone forward on a corner kick — and keeper Ian Shannon outjumped them all to head in, off the underside of the crossbar.

Now 3:07 remained. Staples managed the clock skillfully, and that — combined with tight defense all over the field — earned them the upset win.

“It’s been a crazy week,” said head coach Dan Woog. “Last Saturday — less than a week ago — we were in 11th place. We were almost out. But the seniors showed fantastic leadership, the younger guys got it, and look what happened. I can’t remember a week like this one. What a tribute to these guys.”

Now, Woog added, the team has another 2 days — a luxury — to prepare for the FCIAC semifinals. It’s their 1st appearance in that game in 3 years. And it will be a rematch with Greenwich. The Wreckers won that contest 2-0 on October 15. Which, in the 2014 season, seems like several lifetimes ago. FINAL SCORE: Staples 2, Danbury 1. SEASON RECORD:  10-5-2.

QUICK KICKS: Woog praised the “very classy sportsmanship” of the Hatters after the match. Though devastated, the players congratulated Staples heartily, and told them to “go win it all.” Jack Zeldes was a defensive force against Danbury. (Photo/Kim Lake)