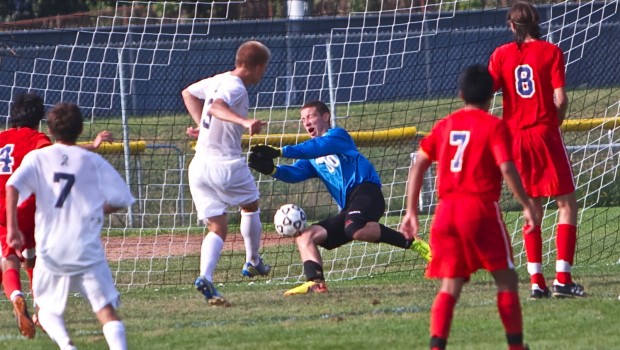 A year ago, in the 1st game of the season, Staples jumped out to a 1-0 lead in Ridgefield. But the Tigers scored twice in the 1st 8 minutes of the 2nd half, handing the Wreckers their 1st opening-day defeat since 1974.

In the final match of the FCIAC season, at Danbury, the blue-and-whites surrendered a lead 40 seconds after intermission. Noah Bender’s decisive strike with just 58 seconds to play gave his side an emotional — and very important — win.

This year’s opening match was home, against the Hatters. Ben Cion’s tweets helped draw a large crowd, and the Wreckers’ new ear-splitting sound system pumped them up.

Nerves were evident from the opening whistle. The initial 10 minutes were ragged on both sides. Then Foster Goldberg — starting at right back in place of Connor Weiler (illness) — hurt his knee on a strong tackle. Steven Sobel came in, and performed solidly. He delivered some pinpoint crosses, and his long throw was a weapon.

Neither team mounted a cohesive attack, until the 26th minute. Joe Pravder hit fellow sophomore Graham Gudis on the left side. Gudis launched a long ball into the goal mouth. Pravder had raced forward, and headed decisively into the corner.

A minute later Pravder’s pass found Jack Scott. The co-captain clanged a shot off the crossbar.

Danbury keeper Ian Shannon had a superb kick save, but Staples kept pressing.

Less than 2 minutes before halftime, the Wreckers earned a corner kick — one of 7 on the day. Gudis took it, low and hard. Michael Reid alertly dummied near post, and defender Andrew Puchala slammed it home.

The 2nd half saw no goals, but better play. Patrick Beusse worked the right side, while Andreas Bru and Daniel Perez Elorza provided sparks off the bench.

Staples’ new uniforms feature a green ribbon on the back, in honor of the 26 children and educators who died in December at Sandy Hook Elementary School….

This was the 1st time in 3 years Staples opened the season as scheduled. Last year’s match with Harding was postponed due to a death in the Presidents’ coach’s family; the year before that, Hurricane Irene struck….

The freshmen, playing at night in Danbury, won 2-0. Spencer Daniels had both goals — one off a gorgeous cross from Daniel Reid, the other a rip from 30 yards after poaching the ball. Thomas Heisler had a tremendous save to secure the shutout, while Teddy Lawrence and Matteo Broccolo had fine defensive efforts for coach Chris O’Dell. Michael Reid does not look happy. Nonetheless, he had a strong effort against the Hatters. (Photo/Kim Lake)