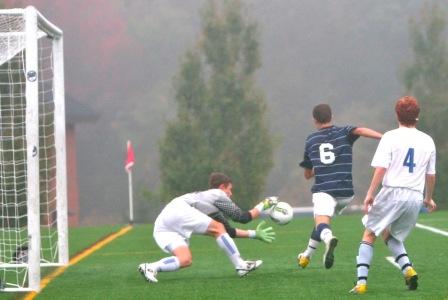 With Staples at 7-0-2, today’s match on the Darien turf looked like a great contest.

Though the Wreckers took command from the start — and just missed a 3:00 goal, when Steve Smith’s free kick slammed off the crossbar — then continued to press, the hosts drew first blood.

A nifty half-volley off a long free kick stunned the crowd — and, probably, both sides.

It was a familiar spot.  Three days ago in Greenwich the Wreckers found themselves down 1-0 after 6 minutes, 2-0 after 23, before rallying for a 3-2 win.

The rest of the 1st half today, in fact, saw some of Staples’ best soccer of the year.  Their quick-passing game was on; they found teammates easily, and forced the Wavers back on defense.

But Darien was equal to the task.  They were strong in the air, and after winning balls they went forward with speed and tenacity.

The 2nd half started with the Westporters knowing they needed more bite in the box.  Within 30 seconds they earned a free kick.  Keeper Fisher saved well.  Then Max Hoberman earned a corner; Ben Root’s header sailed wide.

Hoberman’s cross was hit high; Smith was saved again on a free kick.

At the other end, James Hickok was forced to save 2 consecutive Darien corners.

David Hoffman earned a free kick; Fisher punched it out of danger.

As the clock ticked down, Staples pressed.  But the Wavers managed the game intelligently.  In the final 3 minutes they defended against 3 straight corner kicks, and several throw-ins.

When the final horn sounded, still-surging Darien had their 1st win against Staples since 1997 — and another big victory in what is shaping up as perhaps their best season ever.

“We actually played very, very well — perhaps our best possession, and some of our most team-oriented defense of the year,” said head coach Dan Woog.

Ethan Bradeen started and played strongly on defense for the Wreckers….

Today’s match marked the 1st time this year Staples has not scored….

The freshmen won twice in 2 days.  First they topped Fairfield Warde 4-1, behind 3 goals from Nate Argosh and 1 from Jordan McNair.  Saba Goodarzi and keeper Andrew Osorio stood out.  They then shut out New Canaan 4-0, with 2 goals each from Argosh and McNair.  Coaches Chris O’Dell and Julien Delepine praised Goodarzi and Michael Reid for their fine play.

It's close — but not close enough — for the Wreckers in Darien. (Photo by Carl McNair)