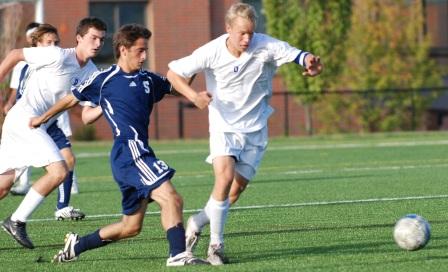 Senior Michael McCarthy — who is having an outstanding season in the Wrecker nets — has been sick for several days.  Into the breach stepped the 9th grader, who has impressed his varsity teammates with his skill, courage and willingness to take charge of players 3 years older.

The Westporters enjoy playing on Darien’s excellent turf, and came out using the fast surface well.  In the 10th minute Mike White drove into the box, earning a corner kick.  He took it himself; his driven ball was power-headed home by Mikey Fitzgerald, the tall defender who is a force on set plays.

Five minutes later Fitzgerald’s quick pass from the back found central midfielder Alan Reiter.  The quad-captain hit White, who raced forward, turned, took a man on, then finished firmly for a 2-0 lead.

In the 18th minute the Blue Wave threatened.  Sweeper Jack Hennessy cleared 2 balls — 1 off the line — and Hickok made a superb save, landing hard on the turf.  He bounced up — but not before the small crowd of Staples faithful held their collective breath.  (The other keeper, Connor Walsh, is still recovering from a broken wrist.  Next in line is field player Luke Yeager.)

In the 22nd minute Brendan Lesch’s header off a Mike Scott throw was saved well by Darien keeper Brennan Branca, but a minute later Hennessy played a long ball out of the back.  Yeager flicked it on, and for the 2nd match in a row his flick was rewarded with a goal.  This time Greg Gudis sniped it in.

Hickok saved once more well, and soon it was 4-0.  This time Reiter initiated things with an instant restart.  He played it to Lesch, who struck true.

The 5th goal — in the 30th minute — came off Scott’s fine run.  Gallagher gathered the feed, making him the 5th Stapleite to score in the 1st half hour.

There was no scoring in the 2nd half, but the Wreckers on the field continued to play intelligent, defend-well-and-then-go-forward Staples soccer.  Steven Denowitz, Jake Malowitz, Nick Cion and Dylan Evans looked particularly solid.  Final score:  Staples 5, Darien 0.  Season record:  3-0-0.

The junior varsity surrendered 2 2nd-half goals — one on a penalty kick — and tied Darien 2-2.  Ben Root and Stephan Patterson scored for Staples….

Steven Denowitz and Nate Greenberg (behind) are on the move, while a Darien player appears less mobile. (Photo by Lisa Krosse)

James Hickok saves in traffic as the 1st half ends in Darien. (Photo by Lisa Krosse)

One Response to Staples vs. Darien