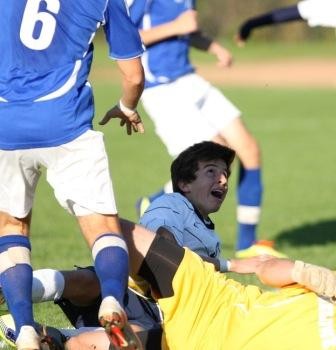 After Staples and Fairfield Warde tied 0-0 on Saturday, the Wrecker coaches told their team to expect a very similar match 2 days later, against the other Fairfield high school.

And that was without knowing that Warde and Fairfield Ludlowe had recently tied, 1-1.

On one of the 1st sunny game days this year, Staples showed a slightly different lineup.  David Hoffman and Lorenz Esposito were paired up front.  Harry Birch pushed forward, while Ben Root slid back.

It took just 15 seconds for the Wreckers to record their 1st shot:  a close rip by Hoffman.

But the match soon settled into a rhythm similar to previous ones.  Staples dominated  both possession and territory, but did not penetrate the box well.  And occasional forays from the opposition kept the Westporters honest.

It took another 30 minutes to record the next telling shot — this one from Max Hoberman, on a driven ball.

At halftime the blue-and-whites vowed to keep the ball lower, and somehow grind out a goal.

Working hard up top, he earned a corner kick in the 62nd minute.  Dylan Evans powered it across the box; Birch found it, and hammered home a header.

The goal broke a frustrating streak of 248 scoreless minutes — and inspired the entire team.  They played their best soccer of the game from then on.  Hickok was sure; Steve Smith controlled midfield, and Will Meinke and Phil Foisie came on late, with fresh legs and soccer brains.

Hickok was called on twice, in the final 2 minutes — and, as always, the junior co-captain came up huge.

Head coach Dan Woog noted — almost repetitively — that of Staples’ 12 matches this fall, 10 have been draws or 1-goal decisions.

“Grinding out 1-0 wins is fine,” he said.  “It’s not easy on the coaches, the players or even the fans, but it gets to be fun.  We’ve got confidence in our defense, confidence we can win games like this, and confidence in each other.”  Final score:  Staples 1, Fairfield Ludlowe 0.  Season record:  8-1-3.

Diego Alanis wants justice, after getting tangled up in the goalmouth. (Photo by Carl McNair)

Ethan Bradeen, with a well-executed tackle. (Photo by Carl McNair)