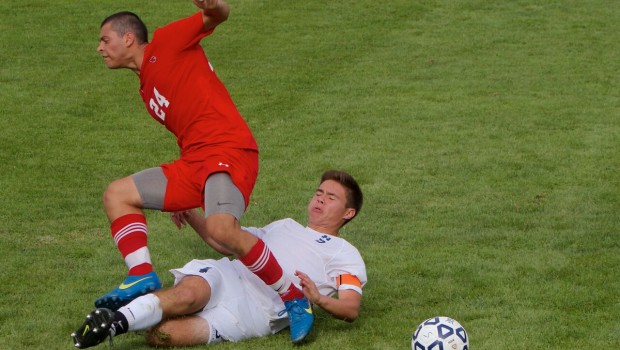 For years, Staples-Greenwich has been one of FCIAC boys soccer’s most heated rivalries. Every meeting is intense. Almost always, there’s a lot on the line.

It’s late September, but today marked the Wreckers’ home opener. A large crowd packed The Hill, anticipating another showdown. They were not disappointed.

Play was ragged at times, but it was another spirited affair. The hosts knew that had their hands full with high-scoring Nick Bartels, the 6-3 midfielder. But they had faith in their defense — and it was well justified.

Noah Schwaeber made his 1st start in goal, after breaking his thumb in mid-summer. The co-captain — wearing the coveted #15 jersey in honor of Preston Hirten — looked in command from the outset. His back line included co-captain Kenji Goto, Josh Berman, Matteo Broccolo and — making his 1st start — Teddy Lawrence.

The Cardinals owned the 1st 10 minutes. The Wreckers were forced into a goal-line clearance, but soon settled down. Aidan Wisher worked the right side well — picking up where he left off against Central — while Graham Gudis took charge on the left. Daniel Perez Elorza and Tyler Wright applied good pressure up top.

The 2nd half was very even. The blue-and-whites kept Greenwich away from the goal moouth for long stretches — but the Cards did the same to them. Daniel Reid, Daniel Brill and Matt Engler won their share of midfield battles — but so did their Card counterparts.

In the 60th minute, Schwaeber came out hard and saved a dangerous low shot. The rebound caromed around, and was cleared by Staples. Greenwich got another chance though, and Alejandro MacLean buried it.

The Westporters went back to work. They pressed hard, but the Cards countered well. Staples picked it up a notch, and Greenwich responded in kind.

As the clock on the new scoreboard ticked down, the Wrecker defense stepped together and caught their foes offside. Goto quickly laid off to Chris Martenson on the right side. The sophomore found Aidan Wisher, far from goal on the right side. He launched a perfect cross to the far post. Berman — the tall defender who moved up in the waning minutes — leaped high to head. He redirected the ball to the unguarded far post. It was a picture-book play — and just 2:14 remained.

“95% of the time, we hate to tie,” said head coach Dan Woog. “This time we’ll take the point. If there’s going to be a tie, it’s a lot better to be the team that does it, in the final minute or two. That says a lot about the heart of this team. I’m a lot happier right now than Greenwich is, I’m sure.”

The Wreckers return to action at 4 p.m. Friday, against St. Joseph. It should be another stern test. Earlier this season, the Cadets tied Greenwich 2-2. FINAL SCORE: Staples 1, Greenwich 1. SEASON RECORD: 2-1-1.

The reserves fell 3-0 to Greenwich….