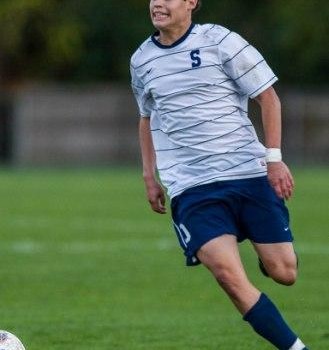 Staples took charge at the start. In the 11th minute Yousef Shahin played a long ball out of the back. Jordan McNair calmly settled, saw the keeper off his line, and beat him for an early lead.

Three minutes later, it was 2-0. Another ball over the top — this one from the other outside back, Jack Scott — sent Noah Bender forward. He too finished patiently. It looked like a rout was on.

But the Rams’ Nico Deambrosio halved the deficit in the 21st minute, following a giveaway near midfield. Harry Birch left with an injury, and the match became more even.

Staples did not convert a goalmouth scramble, and entered halftime up by 1.

Bender opened the 2nd half with a great shot that was stuffed by keeper Michael Powell.

The action flowed back and forth. Keeper James Hickok saved a tough free kick. Powell countered with a fine tip save of Ethan Bradeen’s header, off Bender’s corner kick.

The Wreckers were a toe poke away from a 3rd goal in a 55th-minute goalmouth scramble. Connor Weiler fed Joe Greenwald a minute later; New Canaan forced a corner kick.

Weiler seemed in on goal, alone, but was called offside.

Staples came right back. Greenwald made a great run into the box, and Bender, McNair and Andrew Travers kept pressing. But New Canaan countered well, and the evenly played matched ended exactly that way: dead even.

“On paper, they were the slight favorites,” head coach Dan Woog said. “On the scoreboard, we had the lead. We can’t be satisfied.

“Starting on Friday (in the FCIAC and state tournaments), there are no ties. The toughest teams — mentally as well as physically — prevail.” FINAL SCORE:  Staples 2, New Canaan 2. SEASON RECORD: 9-4-2.

There will be a new FCIAC champion this year. Trumbull — the defending champ — did not qualify for the tourney….

Sam Koenig gives secret signs prior to a throw-in. (Photo by Carl McNair)