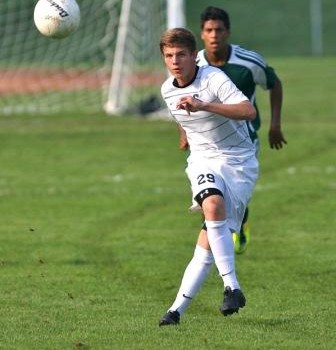 Last year’s Staples-Norwalk contest — a much-anticipated match-up between 2 of the top teams in the league — became the Wreckers’ 1st official home game ever at Wakeman Field, when heavy rain made Loeffler Field unplayable.

Today’s Staples-Norwalk game was almost moved there too, after a week of foul weather.

But Westport’s Parks & Rec crew did a great job getting the grass in shape.  The atmosphere on The Hill — packed with fans of both sides — can’t be beat.  When the 2 teams — again, top contenders in the league — kicked off this afternoon, the large crowd expected an exciting match.

So did many fans around the country, tuning in for the Staples TV studio’s 1st live soccer broadcast ever.

The 1st half was just so-so.

The Wreckers gave the Bears plenty of room to play.  Norwalk took it, but then ran into the tight defense of Jake Malowitz, Harry Birch, Taylor McNair, Alex Tonsberg — and especially Ben Root.

The senior — who scored the only goal in Wednesday’s torrential-downpour win over Ridgefield — was a master of anticipation, winning most balls near midfield.

Neither side had any telling shots until the 32nd minute.  That’s when Wrecker keeper James Hickok made a spectacular sliding save.

The half looked to end scoreless.  Suddenly, David Hoffman played a ball over a defender’s head on the left side.  Dylan Hoy picked up the ball in stride, and finished perfectly.  It was a gorgeous goal — and just 8 seconds remained on the clock.

Norwalk came out fired up after the break.  Birch made a spectacular goal-line save a minute after play resumed.

But Staples was not about to sit back.  The 2nd half heated up.  In the 51st minute Root won a ball, and found Lorenz Esposito wide.

The junior sent Max Hoberman into the corner.  Hoberman beat his man, and laced a ball across the goalmouth.  Keeper Svet Kozak parried it away, but Hoy pounced on the rebound and fired a shot home.  Suddenly, it was 2-0.

Just as suddenly — 27 seconds later — it was 2-1.  The Bears’ Matt Capomolla capitalized with his head on a ball in the corner — proving the adage “goals follow goals” true — and it was back to nail-biting time.

The Wreckers went back on offense.  Three minutes later Hoberman served another fine ball.  It looked like an easy goal — but the shot was flubbed.

In the 58th minute, Birch hammered a shot off the crossbar.  Four minutes after that, Steve Smith’s free kick was nearly headed home by McNair.

But Norwalk was hardly finished.  Hickok was forced into a fine save in the 65th minute.

He saved again, with 5:33 to go — roaring off his line, to the corner of the box — but a penalty kick was awarded.  Hickok readied himself for his 1st PK of the year — against always dangerous Nic Zuniga.

The junior keeper watched Zuniga, reacted — and got a hand on the shot.  But it bounced up and behind him, and caromed in off the crossbar.

Staples came right back — notably on a dangerous free kick by Smith, with less than 3 minutes to go — but the slow-starting game ended very differently:  wildly.

QUICK KICKS:   Taylor McNair organized a “Kick for Nick” drive, collecting dozens of used soccer balls to be distributed by US soldiers, to Iraqi and Afghan children.  There will be collection boxes tomorrow (Saturday, Oct. 1), at the annual car wash at Saugatuck Congregational Church….

Partial funding for the Staples Television Network equipment for today’s broadcast came from the Top of the Hill Team….

Steven Smith is all focus against Norwalk. (Photo by Carl McNair)

Ben Root gets air against Norwalk. (Photo by Carl McNair)

James Hickok gets air as he saves. (Photo by Carl McNair)

A small part of the large crowd on The Hill against Norwalk. (Photo by Carl McNair)

2 Responses to Staples vs. Norwalk