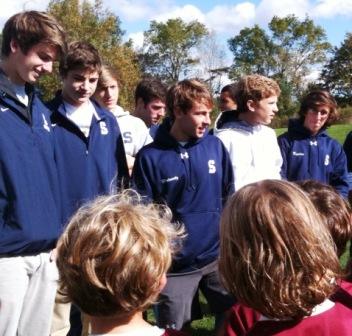 Staples and Norwalk have had some epic games over the past 50 years. Tonight promised to be another.

The Bears brought a 6-0 record — with 4 shutouts, and the #1 ranking in Connecticut — to their home Testa Field turf. The Wreckers — younger, and 3-2 — brought a game plan to counter the fast, crisp-passing, hard-running hosts.

The plan worked for long stretches. The match was played at a rapid pace, and as expected, the Bears worked the ball well upfield.

But Staples’ defenders — seniors Harry Birch, Ethan Bradeen and (on special assignment) Greg Shikowitz, plus  juniors Jack Scott and Yousef Shahin, and sophomore Andrew Puchala — kept Norwalk further from goal than they were used to.

Staples also had James Hickok in goal. The co-captain saw some tough, quick shots, and made several outstanding saves. Two were of the diving, sliding variety. His outlets were deep, and the Wreckers took their cue from his ferocity.

Co-captain Joe Greenwald patrolled the midfield well. Junior Diego Alanis and sophomore Jordan McNair had their hands full on the flanks, but won plenty of balls defensively and went forward with purpose on offense.

But Norwalk lived up to their reputation. Their transitions were rapid, their attack focused and balanced.

It was an end-to-end battle, but with both defenses battening down, it would take a great effort to score.

Norwalk’s came with 13:27 to go, on a bang-bang play from the left. With Staples pressing forward, the Bears iced it 6 minutes later.

Staples coach Dan Woog praised the victors. “If there’s a better team in the state, I don’t want to see them,” he said. “There’s a reason Norwalk is 7-0, and we saw it tonight.”

Woog’s side, meanwhile, faces a very tough schedule — beginning with Trumbull away, on Friday night. But the Wreckers are ready for what lies ahead.

The freshmen shut out Norwalk 3-0. Daniel Brill headed in Graham Gudis’ cross; Gudis chipped the keeper, and Carl Amacker finished out the scoring.