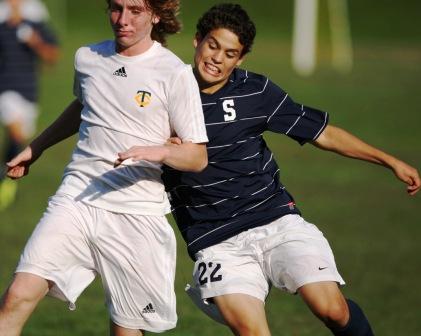 The smallest school in the FCIAC, Trinity Catholic has traditionally had a tough time fielding a soccer team.  This year they’ve got good numbers, solid organization, a strong keeper in Chris Heffernan — and 7-1 sophomore striker Paschal Chukwu.

For the 2nd year in a row, the Wreckers played on the Crusaders’ small, rough field.  The blue-and-whites had a tough time finding their rhythm, and though Lorenz Esposito converted in the 8th minute — off Dylan Hoy’s head flick, following James Hickok’s long punt — it was still 1-0 after 30 minutes.

That’s when Chukwu equalized, off a long throw.  The goal was the 1st of the season against Staples, after 270 minutes of scoreless play.

Despite the 3-1 edge, Staples was not satisfied.  They knew they had not played their brand of ball.

Things picked up in the 2nd half.  Kyle Hoberman and Phil Foisie paced the squad, winning balls at midfield and opening things up.

In the 60th minute Taylor McNair dropped a long ball forward.  Hoffman tucked it in, for his 2nd goal of the game.

Seven minutes after that, keeper Tucker Rizzi made an outstanding save on a breakaway.

Kyle Hoberman closed out the scoring, finishing a solo effort with a great rip.

Head coach Dan Woog cited Aaron Liu and Ethan Bradeen for their defensive efforts.  They started and played much of the game, in place of starters who were unavailable due to illness and a family commitment.  FINAL SCORE:  Staples 5, Trinity Catholic 1.  Season record:  4-0-0.

Taylor McNair and Paschal Chukwu have an oooph moment. (Photo by Carl McNair)