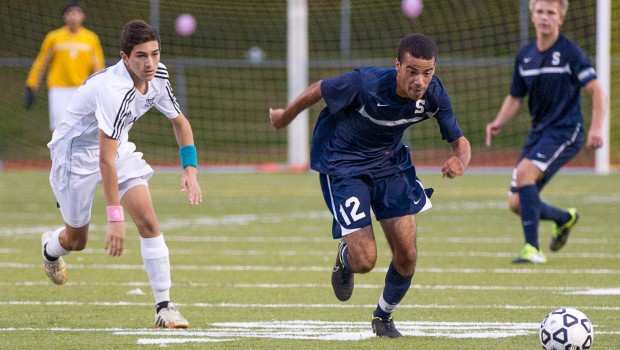 Like Staples, Trumbull has had an inconsistent season. The Golden Eagles brought a 4-7-2 record into today’s match — but 2 of those wins came in their last 2 games, and earlier they tied league-leading Fairfield Ludlowe 2-2.

The Wreckers were coming off an emotional, and physically exhausting, 2-0 win over 3rd-place Greenwich.

Since 2010, Staples had 1 win, 2 losses and 3 ties against Trumbull. The Eagles always play hard and direct. Today was no exception.

They scored 1st, in the 10th minute, on a loose ball in the box. Ziggy Hallgarten had already made 2 fine saves.

At halftime, Andrew Puchala came on. He was limited to 40 minutes today, recovering from a long injury. But the Eagles were the more aggressive side. Three 2nd-half goals doomed the Wreckers, who substituted freely near the end.

They need to be ready on Monday, for Fairfield Warde (7 p.m.). The Mustangs are in the hunt — with the Wreckers — for an FCIAC playoff spot.

Then come matches on Tuesday (at Brien McMahon, 4 p.m. — tentative) and Wednesday (home against Harding, 4 p.m.). In other words, Staples plays 1/4 of their FCIAC schedule — 4 games — in 5 days.

“But Staples teams in the past have faced adversity too. The next few days will show what we’ve got. The best teams dig deep, find something they might not even know they had, pull together and get it done. This can be a fantastic stretch of matches for us — if everyone believes in themselves, their teammates, and the ‘S’ on their chest.” FINAL SCORE: Trumbull 4, Staples 1. SEASON RECORD: 6-5-2.

The junior varsity tied Trumbull 2-2. The Eagles’ goals came in the 1st half, against the run of play. With 10 minutes to play Kenny Brill volleyed into the bottom corner. Two minutes later he got the equalizer, off a long rebound from a shot by Max Hammer. Matt Chernok and Eric D’Addario played well in central midfield, while Stephen Rowland looked strong on the outside. Hammer, Danny Jersey and Nick Benjamin had very good games defensively. Matt Bateman has returned from an injury to add spark. (Photo/Kim Lake)