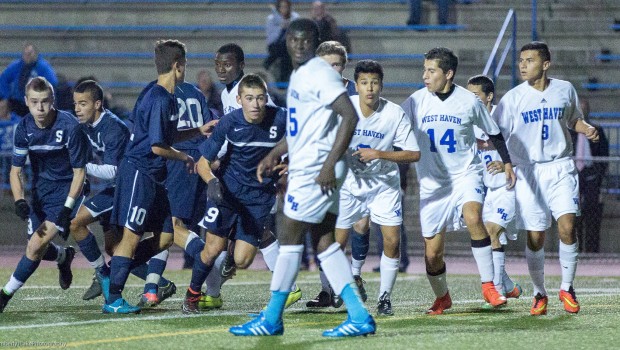 In 2009, the Wreckers won a wild state tournament semifinal match 3-2 over Glastonbury. Three goals were scored in the final 90 seconds of the 1st half. The next year — again in the state semis — Staples thrashed Hall-West Hartford 8-2.

The blue-and-whites returned tonight to Ken Strong Stadium. But this time the host school was also on the field.

The Blue Devils were seeded 3rd in the LL (extra large schools) division, with a sparkling 13-2-1 regular season record. Staples — #19, 9-5-2 in the FCIAC — was coming off a decisive 3-0 victory over #14 East Hartford. The Wreckers were the only lower-ranked team to win in the 1st round.

The Westies featured team speed, individual speed, and plenty of talent. The go-to guys were seniors Selim Turkmen and Sebastian Parra, junior Blaise Haba, plus Salah Oumorou who — though only a sophomore — looked like a man among boys.

Staples had scouted West Haven well. They had a game plan. But first they had to weather a ferocious storm.

The Blue Devils came out charging. For 5 minutes, they had the run of play. In the 7th minute, a long Gabe Pensak throw was headed on to goal. A Westie defender tipped it over the goal with his hand. But there was no call. Throughout the night, in fact, there were few calls either way.

In the 14th minute Nate Argosh powered down the left side. He turned, and laced a cross into the box. Sophomore Daniel Reid touched it back, where Patrick Beusse lay in wait. The tri-captain took one look, and slammed an unstoppable shot into the back of the net.

Fellow captain Michael Reid was sending great balls through, in a variety of ways. Kenji Goto was in charge of the defense. Yet West Haven came on hard. In the 25th minute keeper Noah Schwaeber made a strong save of a hard shot. But Ulises Hernandez pounced on the rebound, to knot the score.

Schwaeber came up huge again in the 31st minute. One minute later, he roared out on a near-certain score, forcing the Blue Devil attacker to shoot wide.

After a very strong and smart opening 25 minutes — keyed also by Denzel Robinson’s hard  running on the left side, and tight defense by Josh Berman, Jack Zeldes and Pensak — the Wreckers had let their hosts gain momentum in the final 15.

The 2nd half started with a stunning West Haven goal. Just 28 seconds in — following another non-call in Staples’ end — Oumorou finished well on a coast-to-coast play.

Berman shot wide on a Staples corner kick. Two more corners went for naught. With time ticking down, Schwaeber saved another shot. Once again though, the Devils pounced on the rebound. Abdul Arumu’s goal made the score a seemingly impossible-to-overcome 3-1. Just 16:45 remained.

But someone on the Wrecker bench yelled “Remember Ridgefield!” In that memorable match — the 3rd of the season — Staples roared back from a 3-0 deficit, for an inspiring 4-3 win.

This time, it took less than 2 minutes to get 1 goal back. Argosh took a corner. It soared past the box, but Pensak pounced from 22 yards out. West Haven’s lead was now 1.

The Westies charged forward. In the 76th minute, Schwaeber saved again. Two minutes after that, a controversial call gave West Haven a direct kick, dead center at the top of the box. Staples’ 5-man wall held fast, and the golden opportunity was cleared.

Back came the Wreckers. They won tackles and head balls. Then — playing with intelligence and poise as well as intensity — they drove into the corners.

Once again, they earned a throw-in. Once again, Pensak took it. And once again the Wreckers executed a set play well. This time it was Berman with the header — and the 3rd goal in 14 minutes.

They did not. Staples stiffened, managed the game — and celebrated one of the most amazing comeback wins in their 56-year history.

When things quieted down, head coach Dan Woog said, “I’m supposed to say something intelligent. But I can’t. There just are no words.”

He did, however, tell his team to get ready for Darien. The #11 Blue Wave — 11-3-2 in the regular season — edged #6 Shelton on penalty kicks. That quarterfinal match is on Friday, at Darien (2 p.m.). With the unbalanced FCIAC schedule, Staples did not meet them this year. FINAL SCORE: Staples 4, West Haven 3. SEASON RECORD: 12-6-2.

This is the 2nd straight year the Wreckers have reached the quarterfinals…. Michael Reid is in command at West Haven. (Photo/Kim Lake) Patrick Beusse has his eyes on the prize. (Photo/Kim Lake) Grant Sirlin gives his all at West Haven. (Photo/Kim Lake) Neither Staples nor West Haven gave any quarter in the state tournament. (Photo/Kim Lake) It looks like Michael Reid’s goal — but Nate Argosh (back to camer) got the tying strike at West Haven. (Photo/Kim Lake) The ball is barely visible – but Josh Berman has won the state tournament match at West Haven. (Photo/Kim Lake)

The joyful Wreckers cool down after a dramatic, come-from-behind 4-3 win at West Haven. (Photo/Kim Lake0