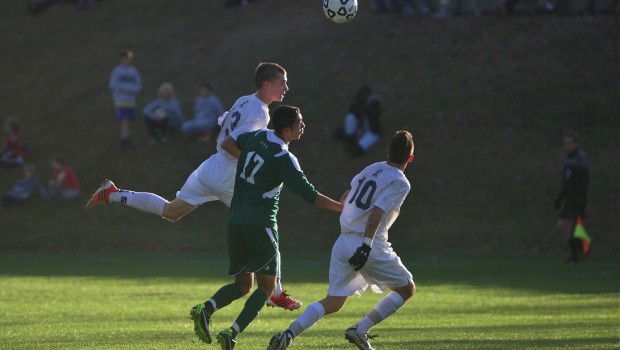 For 24 hours after their FCIAC tournament 1st round exit to Wilton, the Wreckers were reeling. It was their 3rd loss — and 2nd shutout — in a row.

But at pratice that Monday, a new attitude emerged. All 25 players committed themselves to a week of hard work. They trained intensely, jiggered their lineup, and on Friday looked sharp and confident in a 2-0 scrimmage win over top SWC side Masuk. One of the keys to that match was the return of Connor Weiler. The hard-running, tough-tackling defender missed more than a month of the season, with a severe hamstring pull.

Weiler was joined on the back line by Andrew Puchala. The junior defender — a powerhouse in the air — had missed several games with his own injuries. After training for the 1st time yesterday, Puchala — referring to the work done over the past week — said, “I feel like I’ve parachuted into a new team.”

Also back in back: junior Gabe Pensak, fully recovered from a concussion.

At halftime, the coaches urged a bit more play to feet. They talked about driven — not lofted — corner kicks and direct kicks. There was not a lot to say. If Staples continued to play swarming defense, and drive into the red zone, it seemed only a matter of time before they would score. They’d done a solid job of neutralizing Norwalk’s 2 threats, Jose Canahui and Jon Ceja.

The sun was in Dalton’s eyes, at the northern goal, but he kept a clean sheet under intense pressure — “7 minutes of blitzkrieg soccer,” assistant coach Kurt Dasbach called it.

In the 48th minute, on one of the Bears’ few forays, Wrecker keeper Noah Schwaeber made his best save of the season: a tip over the top on a twisting ball. Norwalk’s corner kick laced in; Schwaeber punched it out of danger.

The blue-and-whites came right back. But there seemed to be a force field around the Bear goal. If Dalton was not saving, then the defense was clearing, or the Wreckers were missing by inches.

As time ticked down, Staples’ coaches used Nate Argosh, Graham Gudis and Daniel Perez Elorza to give the hard-working starters some brief moments of rest. If the match went to overtime, the Wreckers did not want to run out of gas. In addition, Steven Sobel came on, for his long throw.

Suddenly, with less than 2 minutes to go, Pravder raced onto an errant clearance. He was 30 yards from goal, on the side by the hill. In an instant — almost too quick to see — the sophomore launched a left-footed half-volley

The ball rose. It looked like it would fly a tad high — just as several other Staples chances had this afternoon.

But it didn’t. It flew over Dalton’s head, then nestled behind him — across the goal line, and in the net.

The Wreckers flew too — into the biggest pig pile since their penalty kick win against Newtown, en route to the 2009 state championship. The enormous crowd on The Hill went berserk. Just 1:39 showed on the clock.

Staples managed the game to the end. They banged everything forward, and rode Pravder’s great goal to victory.

“The Wilton loss was the best thing that could have happened to us,” head coach Dan Woog said after the celebration subsided. “We had 10 days off. We caught our breath. We regained our focus. We got our injured guys back. We worked on what we needed to. Most importantly, we found the joy in soccer, and in our team.”

Woog paid tribute to Norwalk. “They were definitely not a #23 team,” he said. (The Bears — defending FCIAC and state champions — started slowly this year, then caught fire and made the league tournament.) “Chris Laughton (their coach) does a fantastic job. We’ve had epic battles with them, and we respect them immensely. I’m sorry we had to meet in the 1st round.”

But, he added, “I’m also very proud of our guys, and happy for them. As we said after the match, ‘This is what you work for. This is what you’ve earned.’ And now we can’t wait for the next one.”

The next game is Thursday, at Newtown. The #7 Nighthawks defeated #26 New Britain 2-0 today. Game time will be determined by tomorrow morning.

QUICK KICKS: Staples led in shots 19-3, and corner kicks 12-2. That ties Staples’ corner kick high for this season (they also had 12 at Darien)…

The Wreckers’ injury roster has been reduced to just 1. Foster Goldberg — a starting defender who missed much of the season with a knee injury — sustained a concussion in the Masuk scrimmage…. Joe Pravder is all concentration against the Bears. (Photo/Kim Lake) Yousef Shahin owns the left side in the state tournament 1st round match. (Photo/Kim Lake)