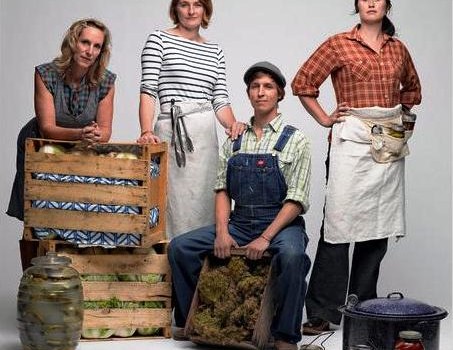 Todd Champagne ’94 has accomplished many things.  He captained the ’93 team to the state championship.  He played at Middlebury College, and worked on a farm on a Norwegian island.

Now is one of the world’s leading organic pickle farmers.

Tomorrow’s New York Times Magazine features Todd and his wife Jordan, in a photo spread about the leaders of today’s DIY (Do It Yourself) food movement.

From their base in Northern California, Todd and  Jordan run Happy Girl Kitchen.  They sell tomatoes, beets, carrots, jams and juices — but their signature product is pickles.

Check out the photo here:

Todd and Jordan Champagne are in the middle. (Photo by Lucas Foglia/New York Times)