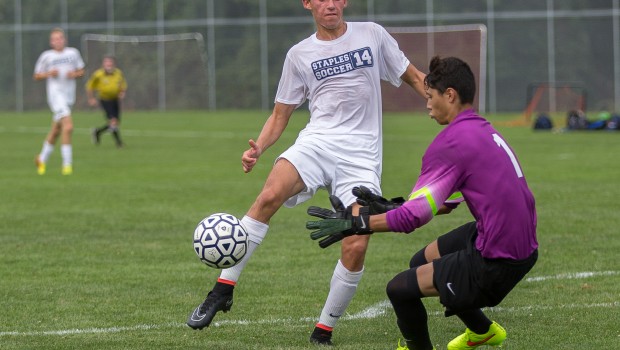 Rosters have been announced for all 3 Staples boys soccer teams.

For the 2nd year in a row, the varsity will carry 26 players. The list — with 10 returnees — includes 7 seniors, 10 juniors and 9 sophomores. There is 1 brother combination: Michael and Daniel Reid.

“We’re very young, but many of the 11th and 12th graders got plenty of experience last year,” said head coach Dan Woog.

With 3 keepers on the squad, and high numbers, several players may get matches from time to time with the junior varsity. Similarly, JVs may join the varsity for games or training.

Complete rosters can be found here, or via “Meet the Wreckers” –> “About the Wreckers” on the dropdown menu above. For more interesting facts about Staples players, click the “Cool Stuff” tab above. Nate Argosh is one of 5 returning seniors on the 2014 Staples varsity. (Photo/Kim Lake)