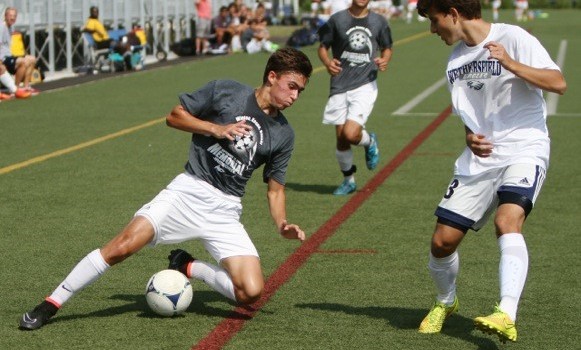 Every year, the Eagles honor 3 former players killed on 9/11. They include Scott Coleman, the former Wrecker who lost his life that day in the World Trade Center. As always, the very moving ceremony was followed by strong soccer and great hospitality.

Staples’ 1st match was against the hosts, on turf. Wethersfield capitalized early, knocking home a goal in the opening minute on a transition. The rest of the match was played evenly, but it ended 1-0.

Players who did not play against the Eagles then took on Fermi High-Enfield. Denzel Robinson scored from Sebastian Wick, but the Falcons equalized. Robinson tallied again, on a goalmouth scramble. Again, the upstaters got one back, earning a 2-2 draw.

The final match, against Kingswood-Oxford, saw Nate Argosh head home Gabe Pensak’s long throw. This match featured Staples’ best play of the day, with plenty of crisp passing and scoring chances, plus good team shape. Kenji Goto and Michael Reid plugged the middle; Argosh, Patrick Beusse and Graham Gudis drove the midfield, and Pensak was a powerful force in back.

The blue-and-whites open the 2014 FCIAC season on Tuesday, with a 4 p.m. home match against St. Joseph. Head coach Dan Woog pronounced his squad “ready to get going. Everything we’ve done so far has led up to Tuesday. Now the real work — and the fun — begins.” Nate Argosh works hard on the the sideline against Wethersfield. (Photo/MaryGrace Gudis)