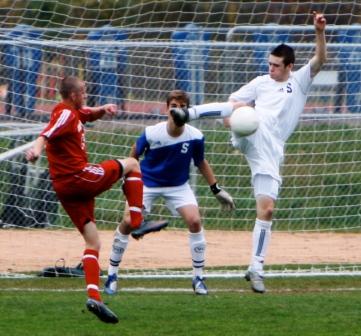 Over a dozen Staples soccer players finished a 6-month, twice-weekly, 6 a.m. workout regimen this week. They came to the Staples Fitness Center early in the morning for 1-hour sessions, even during school vacations, blizzards and windstorms.

The Wreckers focused on upper and lower body strength, and agility. “The difference between January and June is remarkable,” said head coach Dan Woog. “You can see not just their strength and conditioning, but their confidence.”

Woog praised co-captains Diego Alanis and Jack Scott for providing “outstanding leadership” to the juniors, sophomores and freshmen who attended.

Next up: the “Workout of the Week.” Devised by Kurt Dasbach, it’s a weekly challenge that will be posted on StaplesSoccer.com. All players trying out this fall should take the challenge.

And on Saturday, June 22, the 6th “Octathlon of Champions” event will be held. It’s a 5K, part of the Fairfield fundraiser for the Hole in the Wall Gang Camp. All players — including those not in the Octathlon — are welcome to participate.  Contact Jack Scott (jscottchicago10@gmail.com) for details.