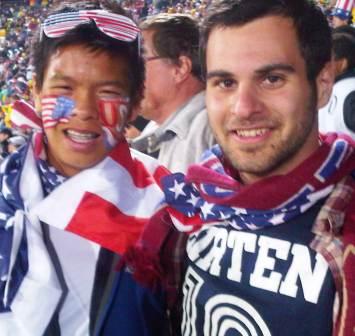 The World Cup is still 3 months away, but the Staples boys soccer program is gearing up to celebrate in some very cool ways.

StaplesSoccer.com is Westport’s headquarters for World Cup. A special page on this site will include a variety of contests (pick bracket and later-round winners; who will win the Golden Boot, get the most red cards, be the breakout star, etc.?), plus daily trivia questions — with prizes for winners. We’ll also post on-the-scene reports from Staples alums and friends traveling in Brazil. If you’ve got more ideas, click “Comments” at the bottom of this story.

In addition, the Wreckers and Westport Soccer Association are teaming up for a special viewing party. On Sunday, June 22, the US plays Ghana (6 p.m.). The African nation eliminated the Americans 4 years ago. We’ll show the big game on a big screen in the Staples auditorium. All soccer fans in Westport are invited to watch.

“The World Cup is the greatest sporting event in the world,” says Staples head coach Dan Woog. “We want to harness that excitement, and share it with everyone in town. There’s nothing like being surrounded by hundreds of other passionate fans.”

Also in the works: smaller viewing parties for Staples players and alumni for other matches. “We’ve done this in previous World Cups,” Woog says. “It’s a great team event — even if the Staples team is thousands of miles away from our national team.”

Parents and alumni interested in helping organize the June 22 event at Staples and Wakeman should email dwoog@optonline.net. In 2010, Alex Tonsberg ’12 and Trevor Lamb ’04 met up at a USA game in South Africa. When the US-England game was shown on a big screen at Staples, the worldwide camera zoomed in on Trevor and Matt Lamb.

Right now, we need a volunteer to head up this project, or perhaps 2 as co-chairs.

There is plenty of planning to do: renting a big TV; securing sponsors so this does not cost anything; figuring out t-shirts, food, etc. We will get help later, including our players – and the WSA is on board – but first we need 1 or 2 leaders. If you can head up this project, please let me know ASAP. First come, first served!