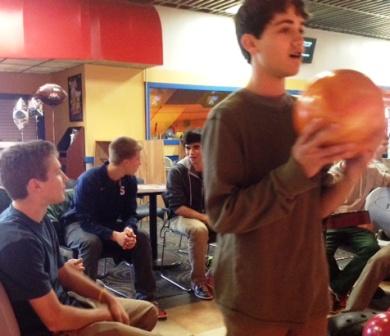 The Wreckers kicked off the 2013 Octathlon of Champions — an 8-month, 8-event competition — today with bowling. A record 20 players participated, blowing away the previous Octo mark.

The Octathlon — open to all returning varsity players, as well as all of last fall’s JV team — features a different event every month. Each competition is designed by a different junior. Upcoming events include flag football, basketball, beach volleyball and capture the flag.

Diego Alanis was in charge of bowling. He chose the venue (Rip Van Winkle Lanes), and designed the format (1 individual game; 1 2-man-team game) and points system (awarded for 1st, 2nd and 3rd places, and most strikes).

Bobby Jacowleff won twice in the 1st round: for high score (176) and most strikes (5). He leads the Octathlon after the 1st event, with 17 points.

Daniel Boyce and Foster Goldberg won the team event, combining for a 223 score.

Noah Schwaeber placed 3rd in the individual competition (122). Nate Argosh and Steve Sobel were 3rd in the team event (208), while Sebo Hood and Sterling Price teamed up for the most strikes (6).

Next month’s event is FIFA. The organizer is Charlie Leonard.

Click below for exclusive video from the Rip Van Winkle Lanes.