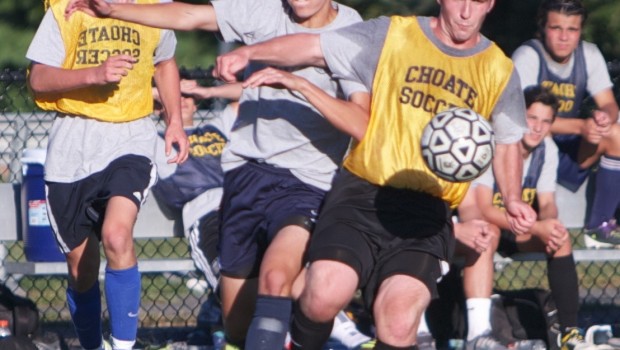 Last Wednesday, the Wreckers looked less than sharp in a 2-0 defeat at Newtown.

Today’s rematch on the Wakeman turf against Choate — one of the top boarding schools in the nation — began with the visitors in charge. They knocked the ball around with authority, and split Staples’ seams. But after 15 minutes the Westporters found their rhythm. Their midfield — keyed by Diego Alanis and Yousef Shahin — tightened up. With defenders George Kokkalis, Andrew Puchala, Connor Weiler and Gabe Pensak holding steady, and Jack Scott and Joe Pravder applying strong pressure up top, the momentum turned.

The 1st 45-minute half ended scoreless. But then the attack began to click. Midway through the 2nd half, Nate Argosh served a great cross from the left. Sophomore Daniel Perez Elorza power-headed it in, just inside the right post.

Several minutes later, Michael Reid’s inswinging corner kick was mishandled by the keeper, and eked inside the near post.

A few minutes after that, sophomore Graham Gudis delivered his own excellent corner kick. Foster Goldberg was on the spot, heading it home.

The 3-0 victory provided satisfaction, both for the way it was achieved and because it came against a strong, well-organized, quality opponent. But there is no rest for the Wreckers. Tomorrow morning they head to Wethersfield, for the annual jamboree. It’s held in honor of that school’s 3 former players killed on 9/11. Staples player Scott Coleman is honored as well.

On Tuesday, the FCIAC season begins on The Hill. Danbury provides the opposition, at 4 p.m.