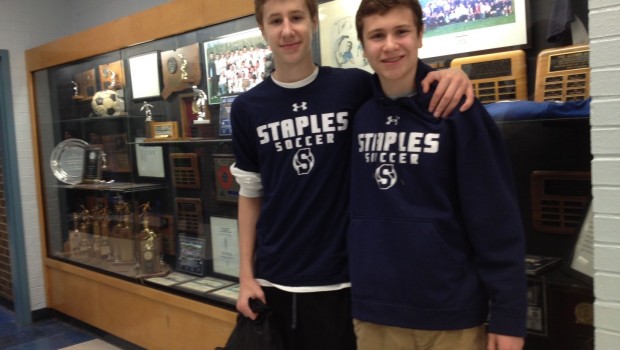 The annual Westport Soccer Association WIN Tournament was a great success — and Staples soccer players helped the cause.

Varsity players Ziggy Hallgarten, Noah Schwaeber and Michael Reid, plus freshmen Kenny Brill, Luca Cocito, Eric D’Addario, Griff O’Neill and Sebastian Wick all volunteered for shifts during the weekend event. Senior Yousef Shahin spent a day refereeing. And goalkeeper coach Tom Henske took a turn at the scorer’s table. Thanks to all, for making the tournament a tremendous success.

Some of the proceeds benefit the Coleman Brothers Foundation, which honors former Wrecker Scott Coleman. He and his brother Keith — a wrestler, and former soccer player too — were killed in the World Trade Center on 9/11.

Congratulations to the WSA U-19 team, which won their age group (and Steven Sobel, for earning the Golden Boot); to the WSA U-16 team, for playing strongly in the difficult U-19 division, and to the WSA U-14s, who lost in penalty kicks in the final to Wilton.