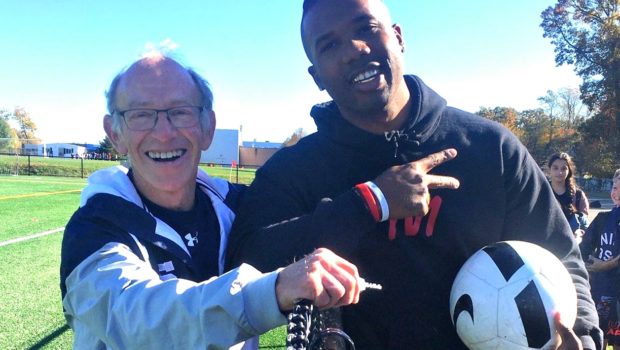 No, that’s not a misprint in the headline. This story is not about a Yale University alum stopping by to say hi to his former Wrecker teammates.

Today, as the Staples team prepared for training at Wakeman, they saw Yalee — the popular singer/songwriter/performer who jumps between R&B and hip-hop in a Chris Brown style.

The Dayton-born star — who launched his career in New York in 2013, and is known for singles like “Pokéma-N-Go” and the 2017 EP “10 Hours Away: You Was Never wit Me Sleepin in My Buick” — was surrounded by high school and middle school fans. But as soon as Yalee realized the soccer team was there, he made time for them.

He posed for selfies and photos (including with the coaching staff), autographed a soccer ball, talked briefly about taking advantage of opportunities, and wished the Wreckers success in their next games.

It was a great — and unexpected — opportunity, for sure.