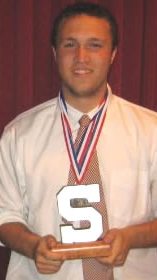 One of Staples soccer’s most important traditions is #15.

The number — worn by Preston Hirten ’07 — is passed along to the next worthy Wrecker, when the current #15 graduates. Preston epitomized tenacious play, passion for soccer, and commitment to his team. He died on the field at the University of Mary Washington, during pre-season training in 2009.

With every year that goes by, fewer and fewer current Staples players and parents will have had the privilege of watching Preston play. Even fewer will have had the privilege of knowing him as a person. But this is exactly why the tradition of #15 exists. 15 is all about representing the qualities that Preston embodied as a person and a player: tenacity, dedication, heart. It’s all about being that player on the field who never quits on his team, who makes everyone around him better. 15 is that player other teams hate to see, because they know he’ll never take a break.

Preston HIrten loved playing against anyone, no matter what size. (Photo by Kerry Long)

This is why my teammates and I were all so happy to see James wearing 15 for the last 2 years. James has shown real character and leadership both on and off the field, and has done Preston’s memory proud. Like Preston was on the field, James is determined, hardworking, and one heck of a soccer player.

But they also shared similarities off the field. Like Preston, James always has the best interest of his teammates in mind. Whether he was watching numerous hours of game film or organizing team hangouts, James did what he thought was best for the team. On behalf of all my teammates, we were very proud with the way you represented Preston.

Oftentimes people forget about the person who an award is named after. That’s OK, time passes, memories fade. What we can’t let happen is forgetting the spirit the award is based on, because wearing #15 isn’t only about representing Preston. It’s about honoring all those who’ve continued the tradition: Liam Bohonnon, Frankie Bergonzi and James Hickok. But this is why I’m so glad James is here to choose who comes next. I know whoever James chooses will be a deserving successor. I cannot wait to watch Staples soccer games next season and see a #15 running around.

James then stood up. He said:

When I received this honor 2 years ago, I was full of mixed emotions. I was proud that I would be able to be the next in line of a chain of honorable men, but also humbled. It was so overwhelming. I had to live up to these men, and match their work ethic, determination, and passion for the game.

I may be one of the last recipients to have seen Preston play on the field. I remember running down from Bedford and sitting on The Hill to watch the team play. My sister was also part of the class of 2007, so I would always hear things about the soccer team and how tight knit they were.

But most of all, it was clear as day to everyone watching that this team was something special. Preston was an integral part of that team, and his work ethic and passion for the game were unrivaled. Thus, just as it was for Frankie, bearing the #15 on my jersey and continuing Preston’s legacy was the greatest honor of all.

What Preston set the standard for and what Frankie passed on was a top notch work rate and attitude toward soccer, and towards life. Knowing that you may not be the best player on the field, or the fastest — which I am often criticized for — I do know that I can work the hardest and achieve the same standard; something that Preston and Frankie made me aware of.

But to me, one of the most evident characteristics of Preston’s play was passion. Passion for playing a game with 10 other people you love and want to win for just as badly as you do for yourself. His teammates have continually expressed how important not only this tradition is, but how important passing on his legacy is.

Currently, goalkeeper Dave Sharpe has the #15 tattooed on his thigh. Along with that, every summer they host a large tournament in Westport, all in honor of Preston. I can’t stress enough how important Preston is to his friends, teammates, and family. Personally, I can only hope to have lived up to his work rate, drive, and passion on and off the field. I want nothing more than to have successfully passed on Preston’s legacy in my time

The next player who will receive this honor embodies the same ideals that I have spoken about so far — passion, drive, work rate, and determination — and will continue to stretch the limits of each of those ideals.

It is my responsibility and honor to hereby pass on #15 to Jack Scott.

Nothing stops Jack Scott on the soccer field.