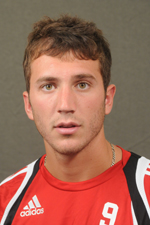 Charlie Reiter ’06 has been named to the CoSIDA/ESPN The Magazine Academic All-District Team.  The Davidson College forward is now on the national ballot for the Academic All-America team.

The political science major — who boasts a 3.48 GPA — also ranks among the top scorers in the country.  His 9 goals and 7 assists leads the Southern Conference.

Earlier this season, Charlie was named the Southern Conference Men’s Soccer Player of the Week.  He got 2 goals and 1 assist in the Wildcats’ wins over College of Charleston and Georgia Southern.  He also scored in Davidson’s 4-1 win over then-No. 6 Duke.

Three Academic All-District teams are chosen in each district, with those on the All-District first teams placed on the national ballot for Academic All-America consideration.  Nominations and voting for the All-America programs are conducted by members of the College Sports Information Directors of America.