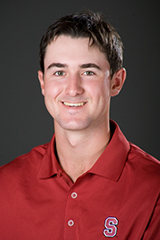 But Monday’s practice round went beyond cool: Cameron was paired with Tiger Woods and Casey Martin.

Cameron is a Stanford University sophomore, and Woods and Martin were Stanford golf teammates. But, Cameron told Golf Digest, “We didn’t talk about Stanford a whole ton. We talked more about the golf course and preparing for the Open.”

Cameron is paired with Martin this Thursday and Friday, at San Francisco’s Olympic Club. He’s shooting to make the cut, and continue playing Saturday and Sunday.

It’s been a busy week for Cameron. As today’s Golf Digest story noted, last night he turned in a term paper on Islamic modernism in the 20th century.

“I’m interested in the topic,” Wilson said. “But not at this moment.”

Golf is not Cameron’s only varsity sport. In the winter he competes on Stanford’s squash team. His twin sister McKenzie sails for Stanford.

The Wilsons live in Rowayton. Cameron — the 2009 Met Golf Association Player of the Year — graduated from St. Luke’s School in New Canaan.

One Response to Dave Wilson ’75’s Son Qualifies For US Open, Plays With Tiger Woods