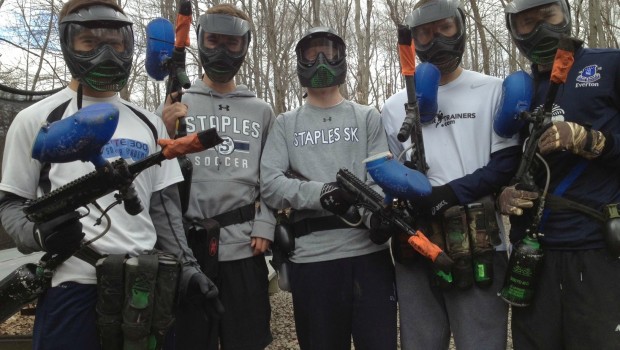 Club games and distance — 40 miles to Waterbury — kept numbers low for the 4th event in the Jack Scott Octathlon of Champions.

But when the dust settled — and the final bullets were fired — Jack Zeldes was the top point-getter in today’s event: paintball. He picked up 10 points as MVP. That — along with the 5 participation points awarded to everyone who made the long haul north — moves him up to 5th place in the overall standings.

Today’s paintball was organized by Lewis. May’s event is mini-golf, led by Reid. Getting ready to attack the paintball terrain in Waterbury are (from left) Kenji Goto, James Lewis, Matt Bateman, Jack Zeldes and Graham Gudis.