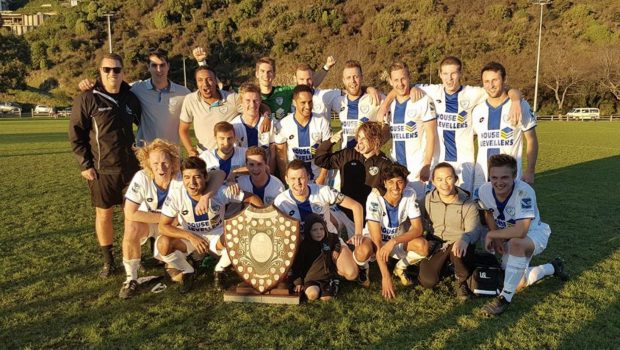 Our Coastal Spirit FC team is sitting in 2nd place in the Mainland Premier League, with just 3 games to go before we move onto the next phase of the season: the South Island Tournament (top 4 teams qualify).

I’ve played every minute since I arrived, with a record of 9 wins, 3 losses, 1 draw and 7 shutouts. We have the best defensive record in the league by far right now.

This weekend we won the Hurley Shield after beating Ferrymead Bays FC 1-0, with an 85th minute upper 90 free kick. The Hurley Shield gets passed around the league.  When you beat the team who has it in their home game, you steal it back.

It has been an awesome couple of months down here, with great teammates in an amazing country. Hope you are all well. I’ll see you back in Westport later this year. James Hickok (green jersey, back row) with his teammates after winning the Hurley Shield.