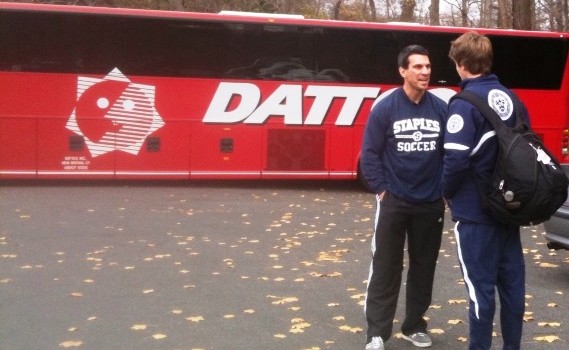 James Hickok ’13 is the latest Staples soccer grad to join a pro team.

The 2-year Wrecker captain and All-American — who went on to earn honors at Dartmouth College, en route to 3 Ivy League championships — traveled to Scotland and Spain this spring, for tryouts.

Now he’s training with the Cosmos, the Brooklyn-based North American Soccer League side. Hickok travels every day to Long Island, to work out with both the 1st and 2nd teams.

Hickok joined the Cosmos thanks to Staples assistant coach Tom Henske’s many connections. Henske — himself a 3-time national champion goalkeeper at the University of Virginia — is a longtime friend of Kevin Anderson, the Cosmos B team head coach (and head coach at Columbia University). Henske is also a former Brooklyn Italians teammate of Giovanni Savarese, and a Long Island Select teammate of Jack Gaeta, Cosmos’ director of operations.

“Staples soccer’s connections are many, varied, broad and deep,” says head coach Dan Woog. “This is one more example of Tom going the extra mile — or 10 — for our players, and of James taking advantage of every chance he gets.”

Staples has sent more than 2 dozen players to the professional ranks, in the US and abroad. The most recent goalkeeper before Hickok was Sean Milligan ’05, who played in Norway. Brendan Lesch ’11 played professionally in New Zealand. Tom Henske and James Hickok, before the 2010 state championship final.