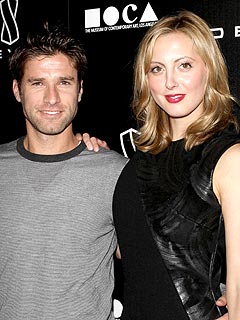 The wedding — filled with both Hollywood and soccer stars — was covered by the national media.

The nuptials were hosted by Amurri’s mom Susan Sarandon and Tim Robbins – who helped raise the bride during his 21-year-long relationship with her mother – and capped off a weekend of festivities including a scavenger hunt, cocktail party and casual oyster roast and barbeque rehearsal dinner.

The ceremony, officiated by Sister Helen Prejean – about whom the movie Dead Man Walking, starring Sarandon, was made – was to be followed by a black-tie celebration of dinner and dancing and guests toasted with Perrier Jouet champagne.

Staples goalkeeper coach Tom Henske — who, like Kyle, attended the University of Virginia, and who was Kyle’s boss at Lenox Advisors — attended the wedding.  Photos were not allowed at the ceremony — but he sent along this shot from the rehearsal dinner the night before.  Tom had just told Kyle about the Wreckers’ 1-0 FCIAC tournament victory over Greenwich.