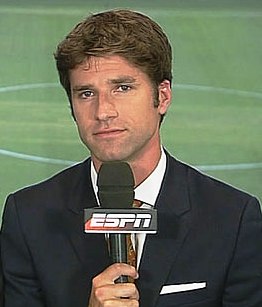 Kyle Martino ’99 has made it to the World Cup.

The Walt Disney Co. — parent company of ESPN and ABC — is going all out this year.  “SportsCenter” will  broadcast live from Johannesburg, and 250 hours of original programming— more than 10 days of TV—are being produced, Yahoo Sports says.

“We’ve sort of pulled out all stops to make sure people pay attention this year, because we’re convinced when they pay attention, they’re going to fall in love with this,” said John Skipper, ESPN’s executive vice president of content.

The lead TV announcer is Sky Sports’ Martin Tyler, considered one of Britain’s top commentators.  That should make for an interesting experience on June 12 — when the US plays England.

ESPN also is bringing in a large number of former players to cover the matches, including Ruud Gullit, John Harkes and Alexi Lalas.

Like ABC, ESPN, and ESPN2, Univision will broadcast in high definition on its main network, TeleFutura and Galavision, a total of 900 hours of coverage in all.

In addition, 54 games will be available on the internet on ESPN3 (formerly ESPN360).  Matches will also be on ESPN Mobile.