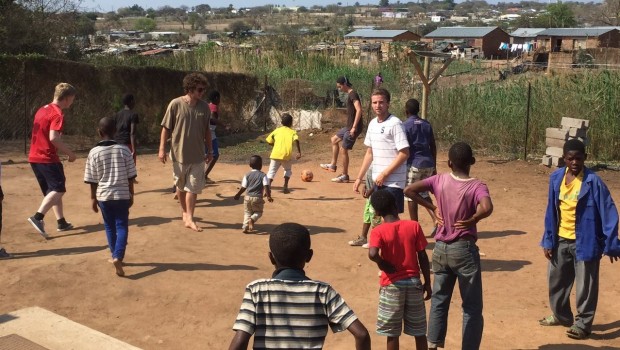 After graduating last June, co-captain Michael Reid ’15 did not follow the traditional college path. He chose a gap year, to travel, do service work, learn about animals — and himself.

Michael has just returned from the 1st part of his adventure, in South Africa. In January, he heads to Asia; next fall he will attend the College of Charleston. Here is his report of his year so far:

I have just returned to reality, after completing a 10-week experience. I volunteered at a private game reserve called Kwa Madwala, located in the north of South Africa. I met a lot of new people and participated in anti-poaching efforts, followed by conservation projects and daily game drives.

I’d never been to Africa, so seeing an unimaginable amount of wild animals up close was absolutely breathtaking. We also visited Kruger National Park a couple of times. It is home to a staggering amount of wildlife, and I highly recommend it to anyone heading to South Africa.

My group and I visited an orphanage once a week. It was in the local township, where many of the people who worked on the reserve lived. I’d never really spent time with less fortunate people before, so I was a bit nervous as to what to expect. It turned out to be one of the most rewarding and unforgettable experiences of the entire trip. We would spend 3 hours with these children, bringing them balloons, bouncy balls and soccer balls. I was covered in sweat by the time the 3 hours were up.

Working with these orphans and diseased children opened my eyes to how truly fortunate we are, and how much we take for granted. We hear people say that so much, especially living in such an affluent town such Westport, but I highly encourage people to work with less fortunate people. You will have a completely different mindset after. It’s amazing how much we forget how lucky we are to have access to “normal” things such as clean water, medicine, and schooling.

The entire experience was utterly amazing. Having weekly visits from elephants and giraffes in the backyard where we stayed is not something I’ll forget soon. Putting a smile on children’s faces who rarely found reason to smile will stay with me for the rest of my life.

I highly encourage anyone to take a gap year and explore the world. We are sheltered from what happens in many countries, and it is an experience you will never forget. If anyone would like to contact me with questions about my trip or reasons to take a gap year, please email reidmichael08@gmail.com. I’ll be happy to answer!