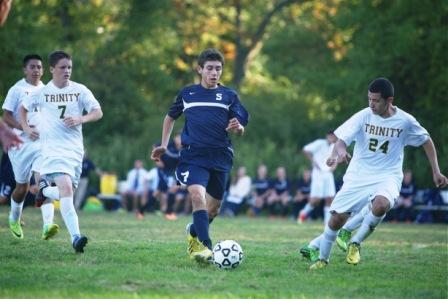 Despite numerous shots, it took the Wreckers nearly 30 minutes on Trinity Catholic’s short, narrow and bumpy field to score their 1st goal against winless Trinity Catholic.

But just 18 seconds after Jack Scott headed in Michael Reid’s corner kick — with an assist in the middle from Andrew Puchala — it was 2-0. Charlie Leonard struck unassisted from the left corner — off the inside of the right post, the moment he was shifted up front from left back — and the game was no longer in doubt.

In the 35th minute Patrick Beusse — the birthday boy who has looked strong at outside midfield, and now in a more central role — found Andreas Bru on the right. The Norwegian delivered a great cross, which Leonard smacked home for his 2nd tally.

Three minutes after that, Graham Gudis delivered a long ball from the left. Bru finished crisply crisply from close range.

The Wreckers managed the game well in the 2nd half. James Lewis controlled the back, assisted by Sebo Hood, Steven Sobel and Yousef Shahin. Sterling Price, Daniel Boyce and Daniel Perez Elorza created plenty of chances up front.

The 5th tally came in the 65th minute. Hood earned a corner kick. Sobel’s shot was rebounded in by Bru, who became the 2nd Stapleite in the game to notch 2 consecutive goals.

“This is not an easy field to play on,” noted head coach Dan Woog. “But we were patient, and kept to our game plan. Now we’ll focus on Norwalk.”

The Bears — who beat Staples with 2 late goals in the regular season last year, then eliminated them 1-0 in a state tournament battle royale — come to Loeffler Field on Thursday. Game time is 4 p.m. FINAL SCORE: Staples 5, Trinity Catholic 0. Season record: 7-1-1. Daniel Perez continues to impress, at midfield and up top. (Photo/Kim Lake) Daniel Boyce and Sterling Price: two heads are better than one. (Photo/Kim Lake)