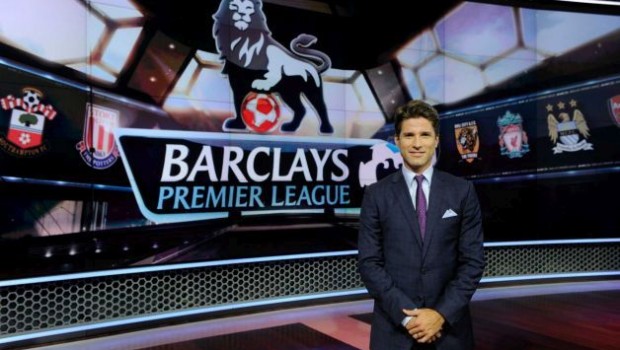 The Longest Day(s) With Kyle Martino ’99

Jim Bacharach ’72 spotted this great story in the Men in Blazers’ Raven newsletter. Here’s how the former High School Player of the Year and US national team member spends a typical weekend:

When Allied Forces parachuted into Normandy, each soldier carried a compass, a cricket noise maker, and an M1 rifle. Covering the Premier League isn’t exactly an invasion to save the Free World. But when Kyle Martino steps on the flight from his home in Southern California to NBCSN’s Stamford, Conn. studio, he is prepared. Alarm clock (check). A 500GB hard drive brimming with every single Premier League game this season (check). Top secret hair product that he refuses to reveal despite absolutely no threat of Rog or Davo using it (check).

In this issue of The Raven, Kyle walks us through a weekend on set, and gives us insight into his transcontinental commute, 4:30 a.m. call times, and Robbie Mustoe’s  “Breakfast Delays.”

FRIDAY
Pacific Time
5:30 a.m. – Wake up. Tiptoe in the dark to our bathroom, where, hopefully, I laid out my clothes so I can get dressed without waking wifey. I forgot to lay out underwear. I blindly stumble back through the bedroom and look for the sock drawer, knocking things over along the way. Woke up the wife. Damn.

6 a.m. – Get in car to airport while simultaneously calling into our NBC format call on which the entire staff talks through the plan for the weekend ahead. This is where the top of Saturday’s show starts to take shape. It’s also where I say my very first words of the day, which usually come out hoarse and scratchy.

7 a.m. – Flight delayed. Wait for crew. I have a love-hate relationship with my six-hour, 3,000-mile commute. Flight delays fall in the hate column.

8:30 a.m. – Board plane and hold up the line while I take out laptop, hard drive, chargers, snacks (trail mix with M&M’s). I know. I know. Get out of the aisle. The actual flight is the “love” (maybe “like”) part of my commute. It is six uninterrupted hours during which I prepare for the weekend ahead. I spend a majority of that time watching games. When I travel, I carry a hard drive with every single Premier League game played this season on it. I’m looking for themes, tactics and little nuances only seen with isolated attention. Like watching “Old School” for the 10th time and noticing a quote you didn’t the first nine. The flight passes quickly. The frequent flier miles are also a plus. Pretty soon, I’ll be flying the plane.

9:30 p.m. – Advil PM. Falling asleep Friday nights can be difficult because I’m still on West Coast time. As a result, I’ve watched some of the best/worst/most addictive television available. Plenty of “Antiques Roadshow”.

SATURDAY
4 a.m. – Wake up. Struggle for first two minutes to remember where I am. Shower. Listen to some talkSPORT. Read some early morning articles.

5 a.m. – Meet a Robbie in the lobby and head to the studio. Robbie Earle is Batman in the morning. He can operate on almost no sleep. I’ve never seen someone appear so professional and put together at 5 a.m. Mustoe and I, on the other hand, do not wear lack of sleep well. Although, having a young daughter has helped me get used it.

5:15 a.m. – Arrive at the studio. Realize at security I’ve forgotten my badge. Again. At which point I tell whichever Robbie I’m with to go ahead and I get a guest pass. Get within 50 yards of the makeup room and hear Rebecca’s laugh. Lack of sleep isn’t a factor for Rebecca, who claims to go to sleep at 6:30 Friday evenings. As a result, her laugh is like a double espresso at 5:00 a.m. Topics of conversation in the makeup room: current events, pop culture, embarrassing moments, Rebecca’s cats. And the open of the show.

7 a.m. – 4 p.m. – Make TV magic and watch the games. The way we watch depends on the number of games on at the time. If multiple games are on at once, we monitor all of them on that massive screen behind us. We have a rule. If you’re focused on a game in which there’s about to be a goal, or important play, you have to shout out what’s happening and where on the big screen that game is. For example: “Top row, second from the left.” If you shout out a false alarm (goal that ends up not being a goal, etc.), you get fined. If we actually collected fines, Rebecca might be in trouble. Another rule. If you’re watching the game via the tactical camera, on which the video feed is typically a second or two ahead of the other feed, you must remain silent.

If it sounds like a lot going on. It is. Often times, during the 10 a.m. slate of games, I’ll excuse myself to the Match of the Day II set, or as I refer to it, the kids’ table, so that I can focus on one game.
We get a lot of questions about what and when we eat throughout the day. It starts with coffee, first thing in the morning. All of us. Across the board. I take my coffee black. At that hour I need a punch in the face to get going. We get breakfast at 7:45 a.m., when the first game kicks off. There is one exception. Occasionally, Mustoe will be so excited about a game, he’ll call what’s become known as a “BD.” Breakfast Delay. He wants to watch the first 15 minutes of the game without food distracting him. All food comes from NBC’s onsite cafe. Throughout the day, we make the switch from coffee to tea (English breakfast for Rebecca and the Robbies, green for me) as we decaffeinate. Lunch also comes from the NBC cafe and also involves acronyms. CRV (chicken, rice, vegetables) is the go to.

4 p.m. – Change and head to the hotel. Contemplate working out. Usually decide not to.
6 p.m. – Meet one of the Robbies in the lobby and head to an area restaurant for the early bird special. Our favorite spot changes season to season. Last year, it was Barcelona in Stamford. This year, we’ve been eating a lot of meals at Eastend in Greenwich. Mac and cheese. Always. And pork chops. Sometime we class it up with a Malbec, but mostly a pint of pale ale to drink.

9 p.m. – Read articles. Watch manager interviews. FaceTime wifey and daughter. Call it a night. While I fight to fall asleep Friday nights, Saturdays are a struggle to stay awake. I’m typically out before my head hits the pillow.

SUNDAY
Repeat Sat 4 a.m.- 4 p.m. – Call time is an hour later Sundays and, because it’s typically only two games, getting up is much easier. It also helps that I’ve had more sleep than Friday’s Power Nap’s worth.