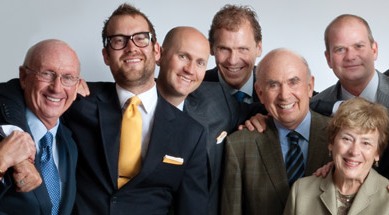 Tyler Mitchell ’97 — grandson of the founder of Mitchells of Westport, and son of uber-Staples soccer supporter Bill Mitchell — has gone into the family business in a big way.

Last fall, when the Mitchell family — owners of Mitchells, Richards and Marshs upscale clothing stores — was deciding whether to buy Wilkes Bashford, a highly regarded but bankrup 2-store Northern California clothier — a key question was who would run them.  Tyler raised his hand.

Last Thanksgiving, he left his beautiful Compo Cove home and headed west.  He now lives in San Francisco, 2 blocks from Wilkes Bashford’s Union Square store, splitting his time between that property and the one in Palo Alto.

Tyler Mitchell '97 is second from left, in between his father Bill and brother Scott '89. Tyler's brother Chris '91 is at far right. All 3 Mitchell boys played Staples soccer.